TRIGGERED? Atlantic’s David Frum Claps Back After Elon Musk Calls Him a ‘Megadouche’ 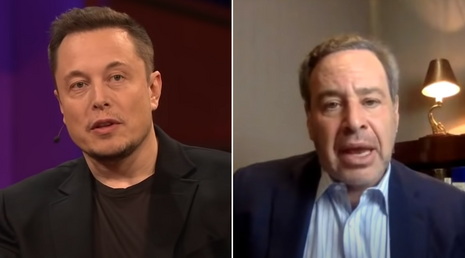 The Post Millennial released a report on Frum’s political hypocrisy. Frum went after Tesla CEO Elon Musk for being allegedly uncouth in posting a satirical meme. The meme compared Canadian Prime Minister Justin Trudeau to Nazi dictator Adolf Hitler following the former’s forceful crackdown on truckers  protesting Canada’s draconian COVID-19 policies. The Post Millennial pointed out that Frum is the last person who should complain about Musk’s meme. In November 2020, Frum compared the Million MAGA March in Washington, D.C., to a picture of a Nazi rally. Musk decimated Frum for his sanctimony in a response to The Post Millennial report on Twitter: “Hypocritical megadouche!” Frum didn’t take kindly to Musk’s swipe and whined that Musk was trolling him: “Isn't it kind of worrying that a major corporate figure would be gullible enough to rely on a tweet from the @TPostMillennial as an information source?”

Frum must not have realized that The Post Millennial had embedded his own tweet comparing pro-Trump events to Nazi rallies in its report.

Frum then arbitrarily compared his exchange with Musk to the experiences of his “female colleagues at @TheAtlantic.” Really.

Serious point. I got trolled tonight by a man with 74 million Twitter followers. My mentions are filled with sludge as a result, but on balance- nothing to write home about. Now I contrast my experience with what has happened to female colleagues at @TheAtlantic & elsewhere ...

If Frum’s behavior wasn’t cringe worthy enough, he even took to pleading his followers to do business with Musk’s competitor Ford.

Conservatives are under attack. Contact The Atlantic at (202) 266-6000 and demand it distance itself from Frum’s nonsense.