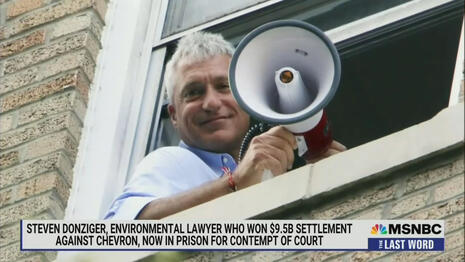 Donziger was convicted of fabricating evidence and engaging in “corrupt” practices to win a legal case against a major oil company. Still, many in the media have gone to bat for him. Outlets like The Hill, Democracy Now!, Axios, Bloomberg News and The Nation painted him as an environmental hero victimized by Big Oil interests. Bloomberg, in particular, fawned how “videos tagged #freedonziger have been viewed more than 700,000 times on TikTok.”

A pro-Donziger propaganda piece by Guardian US columnist Erin Brockovich didn’t mince words: “This lawyer should be world-famous for his battle with Chevron – but he’s in jail.”  Rather than treating him like the legal pariah he is, multiple liberal media outlets have done everything but christen Donziger as the martyred Protector of Gaia throughout the legal saga in past months. But as The Wall Street Journal argued, Donziger’s antics amounted to “The Legal Fraud of the Century.”

Donziger has a decades-long history of attacking oil giant Chevron over alleged pollution in Ecuador. In 1993, Donziger sued Texaco (now merged with Chevron) reportedly alleging that it failed to clean up its oil pits in Lago Agrio, in the northern part of the country. Chevron “had signed proof that it had cleaned its portion of the pits and had been absolved of any liability,” according to The Wall Street Journal.

However, “Mr. Donziger sniffed the potential windfall of a media-ready environmental ‘disaster’ and sued the company for $113 billion,” the paper wrote. He ended up winning the case in Ecuador through “corrupt means,” according to a 485-page court opinion by U.S. District Judge Lewis Kaplan in 2014. Kaplan barred Donziger from enforcing the $9.5 billion Ecuadorian ruling against Chevron in the U.S.

The Nation attempted to spin the Donziger event as “Chevron’s Prosecution of Steven Donziger.” The leftist magazine tried to conspiratorialize the entire affair: “Documents reveal a close collaboration between the oil giant, its law firm, and the ‘private prosecutor’ who sent the environmentalist lawyer to federal prison.”

The Journal reported that Donziger and his team “fabricated evidence, promised $500,000 to an Ecuadorean judge to rule in their favor, ghostwrote much of the final verdict in the case and took other actions that ‘perverted’ the course of justice.” In 2016, the U.S. Court of Appeals for the Second Circuit affirmed Kaplan’s ruling against Donziger, which found that he had “violated the federal Racketeer Influence and Corrupt Organizations Act (RICO),” according to Chevron press release.

Donziger was reportedly disbarred for his actions, ordered to pay Chevron $3.4 million, placed under house arrest and later held in criminal contempt of court in July 2021. He was held in contempt for violations like refusal “to turn over his electronic devices to a forensic expert of Chevron’s, failure to relinquish his share of the Ecuadorian judgment and failure to turn over his passport when ordered to do so,” reported The Journal. He was also reportedly sentenced to six months in prison for his actions.

Liberal media outlets have given Donziger a mountain of positive coverage equal to that of a good public relations operation. The Nation published a piece in March 2021 headlined, “The Ongoing Persecution of Steven Donziger.” The Hill published a piece touting the opinion of the United Nations: “UN rules that Steven Donziger house arrest violates international laws.” Foreign interference? The Hill even published an interview with Donziger, allowing him to suggest  the federal judge who handed down his contempt ruling — U.S. District Judge Loretta Preska — tried to “punish me as much as she can”:

Democracy Now! went immediately for the heroic angle in the headline for its Oct. 28 story on Donziger’s prison sentence: “Environmental Lawyer Who Took On Chevron Starts Serving 6-Month Prison Sentence for Misdemeanor.” In an interview with Donziger, the outlet characterized him as “the environmental lawyer targeted by Chevron after he successfully sued the oil giant for ecological devastation in the Ecuadorian Amazon.”

Liberal outlet Gizmodo featured Donziger’s vendetta against Chevron as one of its “9 Environmental Crimes that would make great movies,” with Chevron being the antagonist. According to the outlet’s drooling propaganda: “If screenwriters are looking for some easy material, the case of Steven Donziger basically writes itself.” It continued: “[Donziger] won the Ecuadorian court battle in a dramatic fashion: it was the biggest environmental human rights judgment in history.”

Bloomberg News portrayed Donziger as a social media icon in an Oct. 1 piece headlined: “TikTok Hero and Chevron Foe Donziger Gets Six Months in Jail.” The outlet lamented that even though Donziger was stripped of his apparently ill-gotten victory in the Ecuadorian case, he “remained a hero to many environmental activists.” Bloomberg continued: “Dozens, including Roger Waters of Pink Floyd, protested his prosecution outside the Manhattan federal courthouse on Friday, and videos tagged #freedonziger have been viewed more than 700,000 times on TikTok.” Talk about currying favor in the court of public opinion.

U.S. District Judge Lewis A. Kaplan did not dispute the pollution in the Amazon, but ruled that Donziger's team used fraudulent evidence and engaged in criminal conduct, [emphasis added].

Donziger celebrated Feb. 4 on Twitter that his ankle bracelet from his house arrest had been removed, and continued to attack Chevron for allegedly targeting him:

BREAKING: The ankle bracelet has been hacked off and I'm heading home! This black claw was both a real and symbolic taking by @Chevron of my freedom and peace of mind for 913 days. Outrageous in the extreme.

Conservatives are under attack. Contact Axios, Democracy Now!, Bloomberg News at letters@bloomberg.net, Gizmodo at (212) 655-9524, The Hill at editor@thehill.com and The Nation at (212) 209-5400 and demand they stop shilling for Donziger.