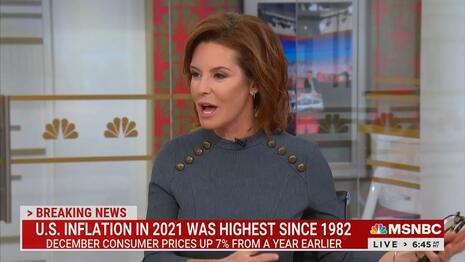 NBC senior business correspondent Stephanie Ruhle is having a tough few days. She can no longer dismiss skyrocketing inflation as just a minor occurrence that Americans can afford.

“KABOOM!” That’s the word Ruhle used to describe inflation spiking an eye-popping 7 percent year-over-year during MSNBC’s Morning Joe on Wednesday. Ruhle stated that the increase was the “biggest yearly increase we have seen since the 1980s” and said, “This is not a good number.”

After trying to spin the news by saying that “we have a very good economy,” she then took a detour back to reality: “High prices make everyone mad and that is not good.” She seems to be slowly realizing that her gaslighting on the matter hasn’t been working.

Insufferable liberal host Joe Scarborough, appearing perplexed at Ruhle’s response, attempted to cast doubt on why people think the economy is bad. “Can you explain something to me? Because I’m just a simple — simple — country lawyer,” Scarborough said. “It’s just like when the job numbers come out. They’ll say, ‘Terrible report!’ Unemployment goes to 3.9 [percent].”

Perhaps the “country lawyer” didn’t realize that the labor force participation rate remained stagnant from November to December at a low 61.9 percent. Also, the economy still hasn’t recovered the 3.6 million jobs still lost from the beginning of the pandemic. But Scarborough continued, wondering why the markets responded positively to the Federal Reserve saying it would potentially raise interest rates.

Ruhle immediately countered Scarborough’s inquiry: “Because rates are currently at zero, Joe! Rates are at zero when you are in financial crisis, when you’re in peril, when you need a boost. We’re not. The country is flush with cash.” Scarborough tried to jump in and downplay Ruhle’s retort: “It seems like we’ve been there for 20 years, though.” Ruhle countered: “Well, we shouldn’t have been at zero rates for this long, and now we are. And so if we were to raise rates a little bit, we’ve still got a long way to go, Joe.”

Her semi-epiphany comes after her Jan. 7 acknowledgement that inflation was a “real problem.” Ruhle claimed during the Nov. 14 edition of NBC’s Sunday Today that “the dirty little secret here, Willie [Geist], while nobody likes to pay more, on average we have the money to do so.” That was easy for her to say, since her net worth currently sits at $6 million, according to Market Realist.