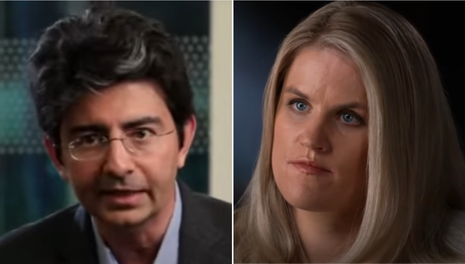 Pierre Omidyar — the founder of eBay — is using his philanthropic organization Luminate to handle “Haugen’s press and government relations in Europe,” according to Politico. In addition, Omidyar’s foundation “last year gave $150,000 to Whistleblower Aid, the nonprofit organization that is providing Haugen’s legal representation and advice.”

Recent reporting revealed that Haugen donated to multiple leftist groups and was a member of the team that censored the Hunter Biden laptop story while at Facebook, according to The Post Millennial. Haugen reportedly also has a history of donating to far-left Democrats like Rep. Alexandria Ocasio-Cortez (D-NY). She is being represented by the “same lawyers as the anonymous Ukraine ‘whistleblower’ whose allegations led to Donald Trump’s impeachment,” according to The Daily Wire.

Haugen’s ties to Omidyar should concern every American who’s wary of the left controlling the content that flows on Big Tech platforms. The causes include those that want to censor conservatives. For example, Omidyar is a prominent funder of the liberal Poynter Institute, which promoted a hit job in 2019 that blacklisted 29 right-leaning news outlets and organizations as “unreliable news websites.” The Omidyar Network Fund Gave at least $1,700,000 to Poynter between 2013-2019 alone, according to Foundation Directory Online data. Facebook partners with the Poynter Institute’s left-wing International Fact-Checking Network.

Omidyar’s philanthropic network also financed the radical left-wing organization Democracy Works, which helped Facebook and Google formulate their notorious 2020 election strategies. Google, in particular, worked with the group “to make sure it's surfacing only true information — and not, Google engineering VP Cathy Edwards said, things like false claims of victory,” according to Protocol.

Democracy Works pushed the controversial practice of mail-in voting, the ballots of which Heritage Foundation Senior Fellow Hans Von Spakovsky said were the “most vulnerable to being altered, stolen, or forged.” Facebook had promoted its collaboration with Democracy Works on its corporate website under a section headlined: “We help prevent the spread of misinformation and provide additional context so people can make informed decisions.”

Omidyar also joined fellow liberal billionaire mega-donor George Soros in financing U.K.-based fact-checking outlet Full Fact for its “immune system” fact-checking software, which was launched in 2017. The system was designed as “an automated fact-checking system” that alerts journalists “to false claims,” according to The Guardian. The outlet tried as early as February 2020 to get ahead of the COVID-19 news and swat down the idea that the virus had leaked from a laboratory in communist China while knowledge about the virus was still very rare at the time.