The American Civil Liberties Union — financed with tens of millions of dollars from leftist billionaire George Soros — justified Orwellian vaccine mandates being forced on Americans by redefining the meaning of “civil liberties” to mean the lack of liberty. 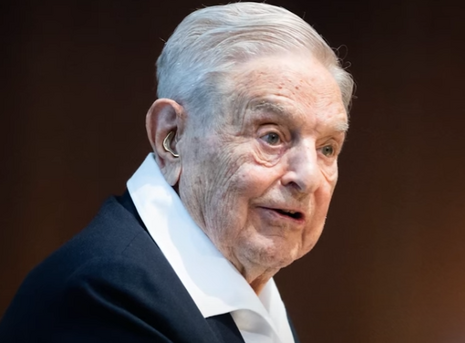 ACLU National Legal Director David Cole and ACLU Program on Freedom of Religion and Belief Director Daniel Mach penned an asinine New York Times op-ed headlined: “Want to Enhance Civil Liberties? Embrace Vaccine Mandates.” The headline has since been stealth-edited. The piece tried to gaslight readers by claiming that “we see no civil liberties problem with requiring Covid-19 vaccines in most circumstances.”

In a bizarre twist, the authors claimed that “far from compromising civil liberties, vaccine mandates actually further civil liberties.” The ACLU’s leftist vaccine logic makes about as much sense as when the organization tried to claim that “[m]en who get their periods” and “give birth” are men. It’s worth noting that Soros funded the ACLU with at least $37,359,845 between 2000-2014 alone.

Soros’s Open Society Foundations has also given $975,000 collectively between the ACLU Foundation and its affiliated organizations in Maryland and Idaho between 2016 and 2019.

The ACLU directors referred to the mandates as a “justifiable intrusion” on autonomy, which is literally counterintuitive to the entire concept of “civil liberties”:

Vaccines are a justifiable intrusion on autonomy and bodily integrity. That may sound ominous, because we all have the fundamental right to bodily integrity and to make our own health care decisions. But these rights are not absolute. They do not include the right to inflict harm on others.

The ACLU is arguing as if someone making a personal medical decision about their own health is inflicting harm on others, even when others have the ability to get vaccinated if they choose. “Therefore,” pontificated the ACLU, vaccine mandates are “permissible in many settings where the unvaccinated pose a risk to others, including schools and universities, hospitals, restaurants and bars, workplaces and businesses open to the public.”

A person may freely choose to accept medical risks for the benefit of others, as when one donates a kidney for transplant. But there is no moral duty to do so. This is why we don’t harvest organs without consent, even if doing so would save many lives. Those who make such sacrifices for others must truly be volunteers, not conscripts drafted by college administrators."

Conservatives are under attack. Contact The New York Times at 800-698-4637 and demand it distance itself from the ACLU’s absurd op-ed saying vaccine mandates “further civil liberties.”