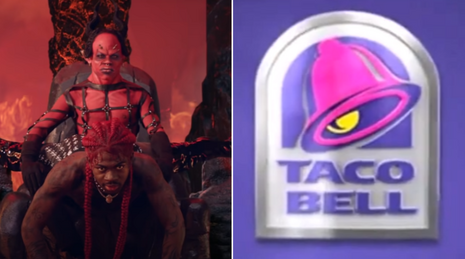 Taco Bell, in its infinite wisdom, picked Lil Nas X — whose real name is Montero Lamar Hill — to become “the brand’s first Chief Impact Officer,” according to Adweek. The outlet described the new position for Hill, who has allegedly worked at Taco Bell in the past, as an “‘honorary’ gig that’s expected to run for several months and fan out over the release of his much-anticipated record, Montero, and the restaurant’s scholarship program for young creatives.”

“Young creatives” for the taco giant clearly include overtly gay artists who get a kick out of giving Satan a lap dance. Hill also caused a media firestorm this year when he announced his “Satan Shoes,” allegedly made with a drop of human blood. Maybe Taco Bell was trying to tell consumers something when it first started selling its now-popular “Diablo” sauce.

Hill will reportedly be featured in an ad campaign “launching this week for Taco Bell’s revived breakfast menu,” Adweek noted.

Hill released the music video for his diabolical self-titled single “Montero (Call Me by Your Name)” earlier this year. The pornographic synopsis of the music video by Variety magazine below underscores the insanity behind Taco Bell’s decision to make Hill the face of its products:

The story opens in a lush Garden of Eden where Nas first introduces the theme of duality, which is displayed throughout the video. He plays the role of Adam as well as the snake that tempts him into giving in to the carnal desires he was forbidden to explore, and we see the two merge and become one. Following a nod to Plato’s Symposium displayed on the tree of life, a shackled up Nas finds himself at his execution day in the Colosseum, where he is surrounded by and receiving judgment from various versions of himself. Once he has been executed, he ascends to heaven only to be pulled down to hell where he harnesses his sexuality to seduce the devil and strip him of his power as an evil force — and dismantling the throne of judgment and punishment that has kept many of us from embracing our true selves out of fear.

Hill wrote a letter accompanying the video to his 14-year-old self and tweeted it with the admission that he had an agenda behind his Satanic indiscretion: “[T]hey will say i’m pushing an agenda. but the truth is, i am. the agenda to make people stay the fuck out of other people’s lives and stop dictating who they should be.”  It’s worth noting that Hill’s target audience has been reported to be “children.”

MRC Business reached out to Taco Bell for comment but has received no response as of the publication of this article.

Conservatives are under attack. Contact Taco Bell’s corporate headquarters at (949) 863-4500 and hold it to account for promoting Satan straddler Lil Nas X as the face of its products.