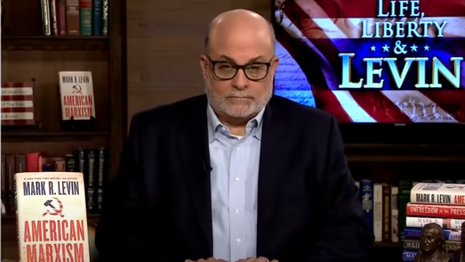 Levin told listeners on the August 2 edition of “The Mark Levin Show” to “look at the businesses in this country.” He continued: “Here we have a country, China, that is slaughtering Muslims; that is now targeting Christians; that is now rounding up freedom supporters in Hong Kong, which is building a military they hope will be second to none to conquer Taiwan.”

Levin slammed how “every damn one of these corporatists is lined up to do business with [China]. Every single one of them!” Levin proceeded to point out how corporate America “attack[s] the Republican Party [as] ‘Jim Crow’” but “say nothing about the Communist Chinese and all the hell they’ve unleashed on this earth. They want to do business with them. They see a big market.”

The radio host mocked the corporatists as “moral frauds” and called out American businesses by name:

[T]hey’re perfectly happy to deal with genocidal mass murderers. Ask The New York Times. They’ve done it multiple times. Apple does it with glee. The NBA, Lebron James — no problem — perfectly happy with it.

Listen to Levin’s Aug. 2 show below. His segment on corporate America begins at the 23:13 minute mark.

Earlier in the segment, Levin decried how these politically-charged corporations are “not the same corporations as we had decades ago.” He continued: “The boards — same woke radicals and leftists — drive their businesses into the ground, unless, of course, they do business with China.”

Levin is right on target.

U.S. corporations like Coca-Cola, Delta Air Lines and Apple recently attacked the Georgia voter integrity law. Coca-Cola Chairman and CEO James Quincey called the law “‘unacceptable’ and a step in the wrong direction,” according to Fox Business. In a statement, Quincey falsely suggested the Georgia voting law would “diminish or deter access to voting.”  However, Coca-Cola was reportedly “silent” when it came to the genocide of Uyghur Muslims in communist China. The company’s website said it invested "$4 billion in China for future growth from 2015 to 2017, building on $9 billion of investments made in the market since 1979."