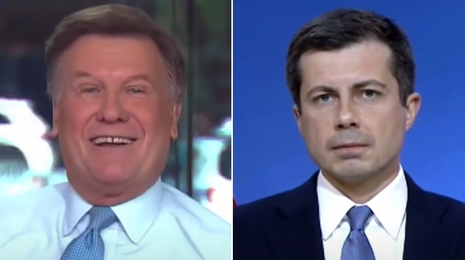 Kernen grilled Transportation Secretary Pete Buttigieg during the May 13 edition of Squawk Box. “We’re proposing a usage for the term ‘infrastructure’ that Republicans would say includes every wish list from the Democratic Party going back 50 years.” Kernen questioned Buttigieg on why he wouldn’t demand that a smaller amount of funding be engineered more narrowly toward clear infrastructure items like “roads, bridges, airports — throw in, you know, some internet and Wi-Fi.” Buttigieg dodged and tried to expand the definition of infrastructure to vaguely include “the broader forms of infrastructure we’re talking about. They’re all part of the foundation that make it possible for us to live well.”

Kernen was not having it and did not allow Buttigieg to dodge the question: “Mr. Sec — come on. Mr. Secretary, you might, you might as well just tell me, ‘You know, you need those roads to drive to free college and free childcare, and therefore, I want to build them so that’ — I mean, come on. Come on.” Kernen rebuked Buttigieg further: “You can’t do all of it at once.” Buttigieg quickly tried to save himself, albeit incoherently: “You can either organize your thinking around the org chart of the federal government or you can organize it around what the lives of human beings in this country are actually like.”

Kernen continued and wouldn’t let Buttigieg escape: “Then you could make that jump to everything under the sun as infrastructure, and we should spend $100 trillion and give everything to everyone because that’s what their life is. You can’t do— We don’t have the money. We don’t have the wherewithal.”

Buttigieg took a nosedive into utter nonsense: “We do have the money though, that’s the thing! Like, we abundantly do have the money — because, because — the bill is paid for, right? And the real question is, ‘Can we afford not to do this?’” Kernen shot back a simple response: “Wow.” Buttigieg argued as if federal funds grow on trees.

Kernen appeared to be disillusioned with the Biden administration’s leftist economic agenda. Kernen said on the May 12 edition of Squawk Box that he was having a horrible sense of “déjà vu.” He said this after noting the rising commodity prices hitting the markets, new military conflict in the Middle East and rising crime in New York City. Specifically, Kernen suggested that the U.S. economy under Biden could end up experiencing a repeat of the nightmarish 1970s stagflation that occurred under former President Jimmy Carter.

Kernen’s “déjà vu” was reinforced by a new CNBC story on Consumer Price Index (CPI) data that was released after his comments. The story revealed that “[i]nflation accelerated at its fastest pace since 2008 last month.” Specifically, the report showed the CPI “spiking 4.2% from a year ago, compared to the Dow Jones estimate for a 3.6% increase.”