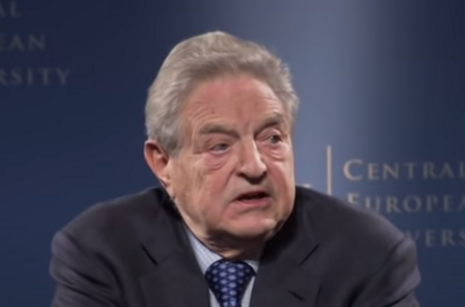 Axios revealed that Soros’s “Open Society Foundations [OSF] are pledging $20 million to jumpstart as much as $100 million for a campaign to rally progressives around President Biden's infrastructure and social welfare proposals.” Soros serves as the OSF chairman. Of course, Axios didn’t mention the projected economic effects of Biden’s agenda to drastically hike taxes to pay for his $2.3 trillion infrastructure proposal in its exclusive. The Wall Street Journal Editorial Board noted that under Biden’s plans, “The middle class will pay for the largest tax increase since 1968.”

But a Soros endorsement for such a radical proposal is par for the course. In 2019, Soros signed an open letter calling on presidential candidates to adopt a “wealth tax.”

Axios noted that OSF’s involvement could signal a “call to action” for the left:

Backing from the George Soros-founded group could serve as an important call to action for Democratic donors and activists who support Biden's initial $2 trillion+ infrastructure plan but want to see him go bigger.

Open Society-U.S. Executive Director Thomas Perriello claimed that “[e]very initiative proposed by President Biden has broad public support,” according to Axios. Perriello’s claim sounded about as fantastical as CNBC’s “flawed” economic survey in February that stated Biden was enjoying a 62 percent approval rating. Perriello continued, emphasizing the extent of OSF’s involvement in pushing Biden’s economic agenda: “‘[W]e’ve seen popular reforms get demonized before by partisans and special interests, and we are not going to let that happen.’”

Perriello also quipped that “‘[f]acts don’t always win without some real muscle put behind getting those facts in front of the American people,’” according to Axios. “Facts” by OSF standards means those that support leftist ideas. Soros’s 2019 globalist claim that he was “really engaged in trying to bend [the arc of history] in the right direction” appears to have been a harbinger of things to come.

The $20 million that OSF pledged would be used towards “grassroots organizing — not paid advertising,” according to Axios. In addition, the “$20 million investment will come from George Soros’s main foundation and his 501(c)4 advocacy group to activate many of the grassroots progressive organizations that took the lead in opposing President Trump’s agenda.”

Co-founder of leftist group Way to Win Leah Hunt-Hendrix told Axios that “we hope” that OSF’s involvement will “give the Biden administration and Congress the assurance that they need to go as big, bold and fast as possible.” Way to Win recently worked with OSF in a controversial $59 million effort to push mail-in voting in the 2020 election.