How does the former Republican National Committee Chairman turned MSNBC political analyst handle his money? By giving to a top Democrat Senate candidate. 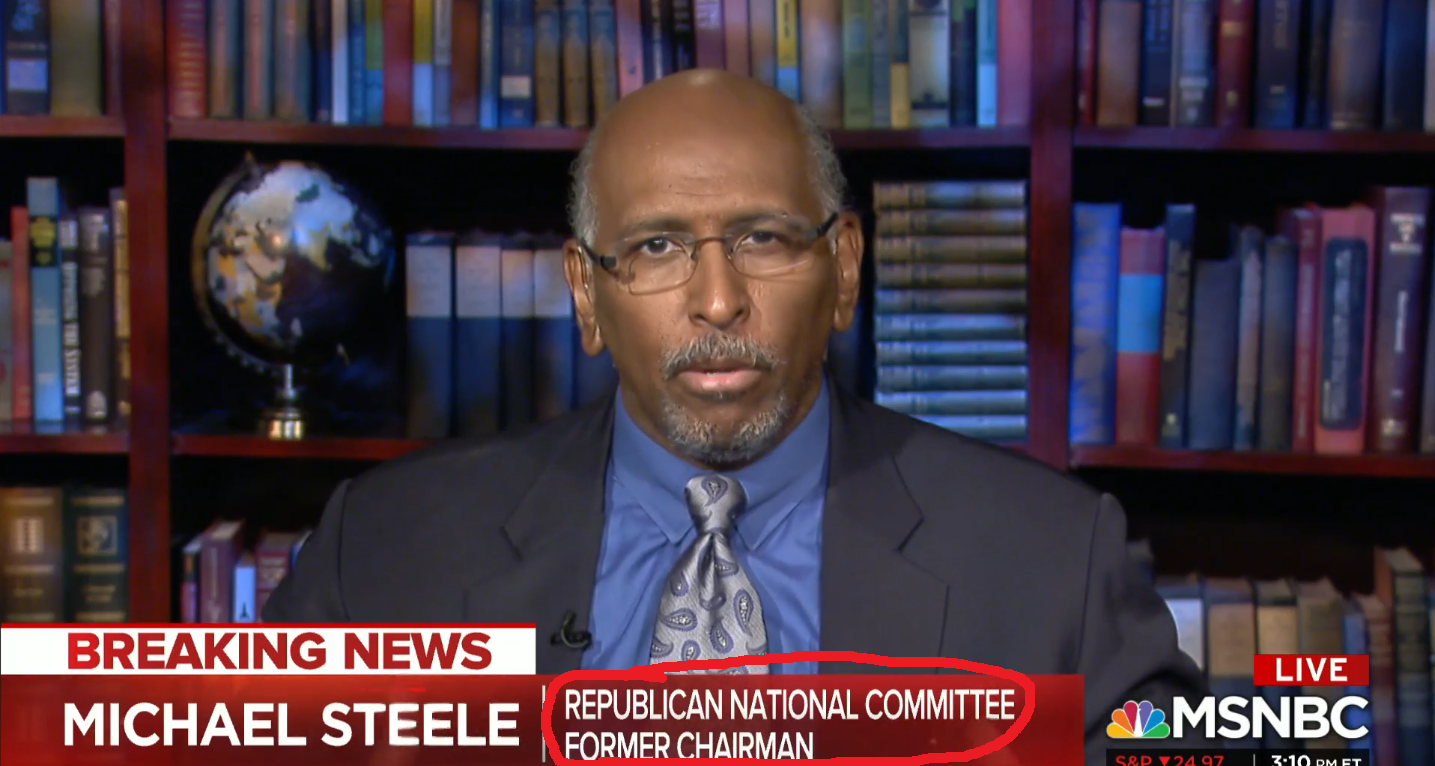 Steele recently referred to supporters of President Donald Trump as “pathetic sycophants.” He also recently accused Republicans of throwing “virtue and value out the window because those things anchor down your choices. It makes it hard to stand with Trump if you still value the propositions and the ideals of the Republican Party of let's say, oh, gosh, let's say Ronald Reagan.”

It turns out valuing “the propositions and the ideals” of Reagan for Steele included contributing to Dems.

For reporting purposes, Steele listed The Steele Group as his employer, of which he is both president and CEO. That said, he is still employed by MSNBC according to his LinkedIn profile.

What’s concerning is that Steele had provided commentary as an analyst for MSNBC on the West Virginia senate elections (amongst others) approximately two months after making his donation. During a Sept. 12, 2018, segment on MSNBC’s Meet The Press Daily, Steele responded to a question concerning the Senate elections and Republican vulnerability, stating:

CHUCK TODD: “If they’re knife fights, and it’s September, isn’t this part of the wave?”

MICHAEL STEELE: “It is part of the wave, and a number of us have been talking about this for close to eight or nine months now, that the Senate could potentially be in play for a lot of reasons. You know, when everybody was counting out West Virginia and places like that. ‘Oh, Democrats are going to lose those seats.’ No they’re not” [emphases added].

Turns out Steele was willing to bet cash on his prediction that Democrats would not lose the senate race in West Virginia by contributing to Manchin’s campaign.

He continued to provide 2018 election commentary for MSNBC in the months following. Steele provided commentary on Republican electoral outlooks following the Brett Kavanaugh debacle in Oct., where he opined that Republican energy still needed to “translate to votes.” On an election day segment of MSNBC’s The Morning Joe, Steele “accused Republican House and Senate candidates of complicity with the president's messaging, which the former RNC chief said is racist and misogynistic,” The Hill reported Nov. 6, 2018.

Steele, along with fellow MSNBC analyst Robert Costa, pinned blame Sept. 26, on a devout affinity to President Trump, a “conservative media complex,” and a love of partisanship for why the Republican Party have refused to join Democrats in their push to impeach and remove Trump.

MRC Business reached out to MSNBC Nov. 12, 2019, for comment with a 3:30 p.m. deadline, but received no response as of the publication of this piece.