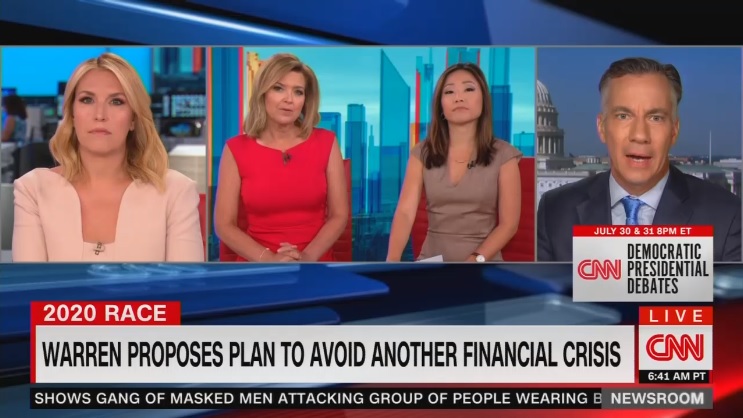 Warren wrote of “The Coming Economic Crash and How to Stop It” on Medium on July 22. In it, she claimed “top economists” warned if the debt ceiling is breached there could be a “catastrophe” worse than 2008’s Lehman Brothers failure.

That morning, CNN Newsroom With Poppy Harlow and Jim Sciutto discussed Warren’s prediction on her terms, rather than pushing back hard on such a dramatic claim. Co-anchor Poppy Harlow said Warren “explains how her policies to raise the federal minimum wage and cancel out student debt could stop an economic downturn.”

Lee called it a “dark prediction,” but gave Warren credit for earlier “warning signs” ahead of the 2008 recession and that “nobody listened.”

Lee gushed that Warren was “leaning so hard” on economic issues and trying to become “the economic candidate out of this big Democratic field.” She didn’t mention that Warren recently smeared private equity firms as “vampires” and attacked Wall Street for “sucking money out of the rest of the economy.” Instead, Lee called that Warren’s “private equity” plan and part of her theme of “economic patriotism” — which is Warren’s own description of her economic platform.

Sciutto said Warren “is not alone” in pointing out “some of the ingredients of a financial crisis,” may be there, but asked Romans if Warren’s more dire warning was becoming “mainstream.”

“Right now, the signals are all very strong in the economy,” Romans admitted after pointing out that the 10-year economic expansion still has a “stock market that is going gangbusters” and low unemployment.

But then she reiterated Warren’s warning about the “yield curve” and debt, and raved that Warren has been “remarkably consistent” in suggesting that “the game is rigged for people with and investors and not the average working family.” She also boosted Warren for warning of potential risks ahead of the 2008 recession.

Sciutto was the only one really tapping the brakes.

“But to be clear, it’s different. A coming recession is one thing, end of this economic cycle, but financial crisis is another thing. She’s basically saying that, you know, we’re looking at 2008 all over again,” he said.

“She’s predicting a financial crisis, you’re right,” Romans said. She admitted that if the economy says strong, it could be a “huge advantage” for President Donald Trump, but still argued Warren’s warning might be “politically savvy” by reminding people of how bad it was.