A Bloomberg Opinion columnist babbled that President Joe Biden’s economy is the best since Bill Clinton’s. That’s despite rampant inflation and credit card debt, and the fact that many families are struggling to pay everyday bills. 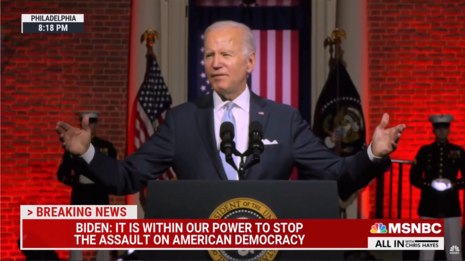 Bloomberg Opinion columnist Justin Fox broke out the pom-poms to cheer Biden’s economic leadership despite the U.S. entering a technical recession last month. Fox argued that the government’s economic growth numbers indicate that Biden is “on pace to compile by far the best growth record since Bill Clinton” in an Aug. 31 piece.

Fox immediately undermined his story in the subheadline: “Then again, inflation under Biden is the worst since Carter, so there’s no cause for celebrating yet.”

Cato Institute economist Chris Edwards ripped Fox for his bunk economic arguments. In an interview with MRC Business, Edwards said it “takes chutzpah to claim Biden’s economy is growing fast after the U.S. Bureau of Economic Analysis (BEA) just reported a half year of negative growth. The U.S. economy shrunk the first half of 2022.”

What was Fox’s evidence for his absurd claim? He invented his own arbitrary measure of U.S. presidents’ economic performance by averaging the GDP “and another metric tracked by the BEA, gross domestic income” (GDI) in a bit of mathematical jujitsu that he admitted was data manipulation. “By using an average of GDP and GDI to measure economic growth I really am shifting the goalposts, but I think it’s justified,” Fox wrote. [Emphasis added].

Edwards explained that proposing “GDI as a new metric for U.S. growth is like the administration recently claiming that two quarters of negative growth is now not the proper metric for if we are in a recession.”

Podcaster Joe Rogan called out the White House for playing word games on recession, saying that “It should be something that people get angry about” and that the government manipulated definitions “to pretend that you’re doing a good job.”

That trend seemed only to inspire Fox to continue defending Biden and the liberal media’s attempts to redefine the word “recession”:

“There have been a lot of complaints lately that the Biden administration and the media are shifting the goalposts on how recessions are defined by looking past those two consecutive quarters of negative GDP growth to other indicators such as payroll employment, industrial production and real incomes that show continued growth.”

Of course, even government lockdowns didn’t convince Fox to give Trump a fair shake. “It’s true that the pandemic was bad luck, and that US economic performance during Trump’s final year in office actually stacked up well versus other rich countries,” Fox wrote. “It doesn’t seem right to give Trump special treatment.”