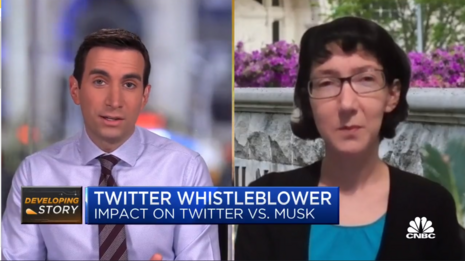 Squawk Box co-anchor Andrew Sorkin framed Zatko’s Twitter bashing as an inflated crisis: “This, in some ways, seemed like a bombshell,” Sorkin hedged. “Do we need to look at the bots the way Elon Musk is asking, or don’t we?”

Sorkin editorialized despite Zatko making several apparent revelations earlier this week about how Twitter calculates the percentage of spam accounts versus regular accounts on its platform. Zatko directly stated in a letter to Congress that Twitter was “Lying about Bots to Elon Musk.”

She apparently based her claims on Twitter’s monetizable daily active users (mDAU) figure.  “Musk’s headline claim for why he gets to walk away from the deal is that Twitter misstated its mDAU figure,” she said. “The interesting thing about this whistleblower is that he actually agrees with Twitter” that the mDAU number is “basically accurate and that they basically try to minimize the amount of spam within that figure.”

"The whistleblower actually agrees... that @Twitter's monetizable daily active user figure is basically accurate," says @AnnMLipton. "To that extent, it actually contradicts what @elonmusk has said and is good for $TWTR." pic.twitter.com/OwuLVa0EiB

Lipton seems to have cherry-picked a single phrase from Zatko’s redacted whistleblower complaint: “Twitter is already doing a decent job excluding spam bots and other worthless accounts from its calculation of mDAU.” But Lipton omitted the fact that Twitter’s mDAU calculation is designed to exclude spam bots.

Contrary to Lipton’s absurd argument, Zatko slammed  — and did not defend — Twitter in his complaint, saying that Tesla CEO Elon Musk “is correct” in claiming that Twitter executives “have little or no personal incentive to accurately ‘detect’ or measure the prevalence of spam bots.”

Conservatives are under attack. Contact your representatives and demand that Big Tech be held to account to mirror the First Amendment. If you have been censored, contact us using CensorTrack’s contact form, and help us hold Big Tech accountable