An expert in the World Economic Forum “expert network” sang the praises of President Joe Biden’s $740 billion bill for being a “socially progressive” utopian green law, despite a climate expert’s recent analysis that the science the law was based on was basically bunk. 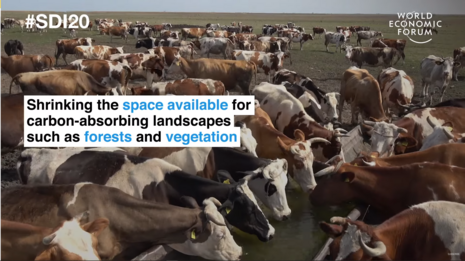 Dr. Bjorn Lomborg crunched the numbers and concluded that the government’s predictions of a reduction in carbon emissions wouldn’t even budge the world’s temperature by a “thousandth of a degree fahrenheit.” Lomborg stated that Biden’s 755-page mutant climate bill was practically “worthless” and would have a negligible effect on climate.

But that didn’t stop lawyer and elitist Davos attendee Humzah Yazdani from claiming Biden’s so-called “Inflation Reduction Act”has “the potential to positively impact the whole world” in an Aug. 22 article posted on the WEF website. The story was headlined, “Why the US Inflation Reduction Act is an important step in the transition to clean energy.” Gross.

Yazdani was effusive in his praise of the climate law: “On August 16, 2022, American President Joe Biden signed the Inflation Reduction Act (IRA) into law. The IRA is the most meaningful climate bill ever passed in the US[.] It has the potential to significantly curb the country’s greenhouse gas emissions (GHG) over the next few years.”

In addition to fawning over the IRA’s government tax credit provisions, Yazdani talked up the new law’s “Methane Emissions Reduction Program.” The law provides $1.5 billion to the Environmental Protection Agency to monitor methane production and impose penalties on those who apparently produce too much of the naturally occuring gas.

The transition to a clean energy future is extremely expensive, but Yazdani ignored that point completely. He instead pointed to using hundreds of billions of taxpayer dollars to combat the so-called climate change threat. The elitist wrote that the $369 billion in the IRA “earmarked for clean energy and climate change mitigation initiatives” was an “unprecedented level of support” from the government for the “transition to sustainable energy.” Apparently, Biden found himself in the good graces of the global elite.

But Yazdani didn’t stop there. Though he’s not a scientist, he opined on how the new law will supposedly slash the levels of greenhouse gas in the atmosphere. “It is expected that the Act will reduce US GHG emissions to approximately 40%, compared to 2005-levels, by 2030,” he wrote.

Yazdani also endorsed government tax credits to enforce climate regulations, which he euphemistically referred to as “incentives.” “It is expected that these new incentives will allow the US to make significant strides in curbing its GHG emissions and help it meet its targets under the Paris Agreement.”

The Paris Agreement is a controversial treaty endorsed by the United Nations that strives to force all nations to reduce their carbon emissions. Former Secretary of State Mike Pompeo said in 2019 that “President Trump made the decision to withdraw from the Paris Agreement because of the unfair economic burden imposed on American workers, businesses, and taxpayers by U.S. pledges made under the Agreement.”