Liberal billionaire Bill Gates embarked on a campaign to woo Sen. Joe Manchin (D-WV) in an attempt to gain his support for President Joe Biden’s massive climate bill, according to a new report. 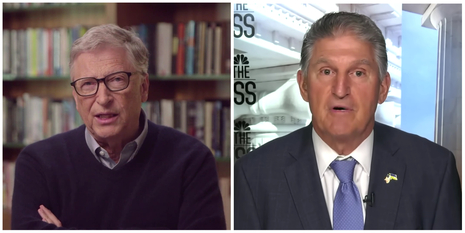 A new Bloomberg Green report exposed a years-long behind-the-scenes pressure campaign by Gates to influence the senator into supporting his leftist climate agenda. Recently, when it appeared that Manchin was set to sink massive left-wing legislative efforts that included “climate or tax provisions” last month, Bloomberg Green said that Gates “felt he had to give one of the nation’s most powerful lawmakers a little pep talk,” referring to Sen. Chuck Schumer (D-NY). The Aug. 16 story was headlined: “Bill Gates and the Secret Push to Save Biden’s Climate Bill.”

Gates reportedly didn’t just start his secret efforts to influence Manchin and other U.S. legislators to adopt his radical utopian vision on climate. “As [Gates] revealed to Bloomberg Green, he has quietly lobbied Manchin and other senators, starting before Biden had won the White House, in anticipation of a rare moment in which heavy federal spending might be secured for the clean-energy transition,” Bloomberg said.

When Manchin expressed hesitancy to supporting new climate spending, Gates reportedly saw “‘a unique opportunity.’” He “tapped into a relationship with Manchin that he’d cultivated for at least three years. ‘We were able to talk even at a time when he felt people weren’t listening,’” Gates reportedly told Bloomberg. Biden signed his mammoth climate bill today, thanks to Manchin’s newfound support, during a ceremony at the White House. The $740 billion farce of an Inflation Reduction Act (IRA) allocates $369 billion to new climate spending.

But Gates is no climate angel. He admitted in 2021 that he has one of the “highest greenhouse gas footprints of anyone on the planet” in an interview with CNN host Anderson Cooper. He is also worth a whopping $118 billion, according to Celebrity Net Worth. Gates’ net worth alone accounts for roughly 32 percent of the $369 billion in the IRA's climate spending. This indicates that even Gates’ enormous net worth can only cover just over a quarter of the price tag that he and Biden are forcing U.S. taxpayers to pay for their extreme green policies.

Gates celebrated the passage of the IRA that he apparently helped push over the finish line on Twitter Aug. 12: “The Inflation Reduction Act’s passage through Congress is nothing short of extraordinary.” He continued: “This $369 billion investment will spark innovation, drive job creation, and reduce energy prices and emissions. It sets a clear example of what serious climate action looks like.”

This $369 billion investment will spark innovation, drive job creation, and reduce energy prices and emissions. It sets a clear example of what serious climate action looks like.

So much for the left’s harrumphing about the power of special interests in politics.