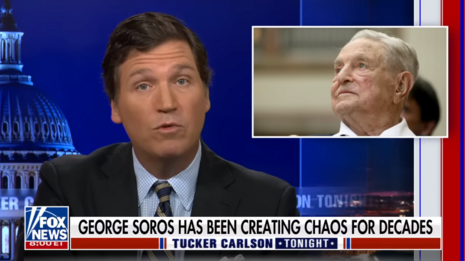 “George Soros has decided to destroy the American justice system, and he's doing it with prosecutors,” Carlson said on his eponymous show. Soros has an established record of subverting the justice system. But he ran into opposition in Florida, when Gov. Ron DeSantis suspended a Soros-backed prosecutor for putting himself, “publicly, above the law.”

Earlier in the day, DeSantis tweeted: “In Florida, we will not allow a prosecutor to be a law unto himself.”

Former Florida State Attorney Andrew Warren made news in April 2020 for supporting “the arrest of a megachurch pastor who had held church services in person,”  according to the Tampa Bay Times.

Warren criticized the pastor for “hiding behind the First Amendment” and quoted from Scripture to chide the church leader. “Lastly, I’d remind the good pastor of Mark 12:31,  which says there’s no more important Commandment than to love thy neighbor as thyself,” he said. “Loving your neighbors is protecting them, not jeopardizing their health by exposing them to this deadly virus.”

But Warren is just the tip of the iceberg of Soros’s influence, Carlson explained, citing a report by the Law Enforcement Legal Defense Fund (LELDF). The LELDF released a report showing at least 75 “Soros-backed social justice prosecutors” are in power today. To put that into perspective: “By this point, fully one-in-five Americans, that's more than seventy million people, now live in a jurisdiction overseen by a Soros-backed prosecutor,” Carlson said.

If money talks, Soros’s money is talking up a political firestorm. That’s because Soros “has spent more than $40 million” over the past decade to elect prosecutors, according to the LELDF report.

The results of Soros’s cloaked campaign to put woke prosecutors in office is costing the American people dearly, Carlson said.

“A lot of people have died. Last year, Philadelphia recorded its highest homicide total in history. Overall, nationally, according to the FBI, homicides in the United States jumped thirty percent in 2020. That is the largest single-year increase in murders in American history. All because one billionaire decided that laws American citizens voted for and support, were racist. Does that sound like democracy to you?”

None of that stopped Soros from claiming his woke prosecutors are “effective” and even “popular” in a recent op-ed for The Wall Street Journal, however. The July 31 op-ed was headlined, “Why I Support Reform Prosecutors.”