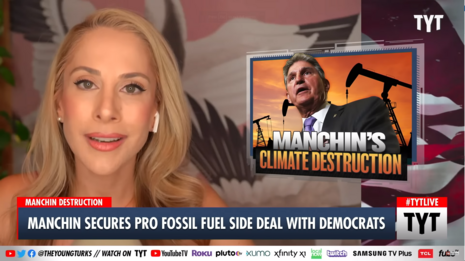 While some progressive Democrats are cheering Biden’s so-called “Inflation Reduction Act,” The Young Turks (TYT) co-host Ana Kasparian predicted radical environmentalists would be disappointed with the bill during an Aug. 4 video rant.

“[T]he final bill, after it goes through the process of debates and negotiations, will probably strip out many of the good provisions that progressives are trying to celebrate today,” Kasperian said. “I have no doubt that that is what the end result will be.”

She then postured herself as a righteous defender of leftist activists by attacking Democrats unwilling to buckle to the radical leftist agenda. “If I’m the bad guy for being critical toward this weak-sauce garbage that we keep getting sold by the Democratic Party — apologies,” Kasperian said.

TYT was once a member of the now defunct Media Consortium, a liberal media echo chamber that leftist billionaire George Soros is connected to through another organization, the Media Democracy Fund. Soros has given at least $3,520,000 to support the Media Democracy Fund between 2016 and 2020, according to Open Society Foundations.

But Kasparian also claimed it was time for far leftists “to play hardball” with less radical Democrats like Sens. Kyrsten Sinema (AZ) Joe Manchin (WV). Those two, Kasparian whined, are selling out progressives on climate change.

She targeted Sinema in particular for her rumored opposition to Biden’s so-called “Inflation Reduction Act,” a bill that would raise spending by at least $260 billion, according to The New York Times. “[W]e all know who her donors are,” Kasparian said. “We all know who she sold out to, even though she ran as this, uh, ‘fire-breathing progressive.’ Nah, she got a little tasty-taste of that cash, loves that cash.”

The Young Turks didn’t specify who, exactly, they were talking about, but they may have been hearkening back to a report by The Guardian in February that Sinema “courted Republican fossil fuel donors” during a meeting in Houston.

TYT co-host Cenk Uygur echoed Kasparian’s far-left case against Biden’s bill on Twitter: “This Manchin-Schumer ‘compromise’ will turn into a giant subsidy for every part of the energy industry,” Uygur tweeted. “Then Sinema will gut the tax increases. And at the end, it will be a standard corporate pork bill paid for by the American taxpayers. And media will tell us it's ‘historic.’”

This Manchin-Schumer "compromise" will turn into a giant subsidy for every part of the energy industry. Then Sinema will gut the tax increases. And at the end, it will be a standard corporate pork bill paid for by the American taxpayers. And media will tell us it's "historic."

TYT wasn’t the only media organization to attack Democrats for compromising on Biden’s climate monstrosity. Forbes slammed Sen. Chuck Schumer’s (D-NY) compromise with Manchin, calling it a “Faustian bargain” that could “jeopardize offshore wind” and “renewable energy on federal lands” in an Aug. 3 analysis piece.