One of the foremost opponents of woke Corporate America, Vivek Ramaswamy, joined conservative radio host Glenn Beck to smack down environmental, social and governance standards and emphasize the dangers they present to the American people. 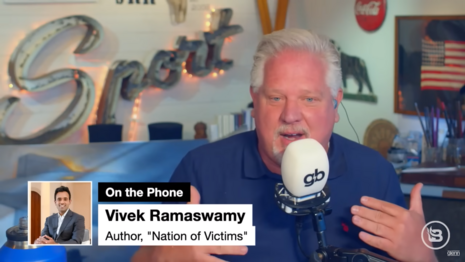 Investor Ramaswamy told Beck on July 20 that the ESG movement provides a smokescreen for investment titans like BlackRock to rob the American people blind and then use the bilked money to undercut fossil fuels and make life more expensive.

“It’s a fraud of our time, where Americans are paying for $5 gas at the pump with one hand, not knowing that their own 401(k) accounts and their own pension fund accounts and brokerage accounts are actually subsidizing the very ESG agenda that gives them $5 gas in the first place,” Ramaswamy said. [Emphasis added].

BlackRock accomplishes “through the backdoor what government could not get done through the front door, through Congress,” Ramaswamy said. While Biden “doesn’t have the political support” to end fossil fuels, he explained, his administration is “deputizing” BlackRock to do just that.

The powerful investment firm has over $10 trillion in assets, according to Bloomberg News, and it uses that money to force Corporate America to either accept the woke gospel, or risk destruction. It’s a world that “would make our Founding Fathers shudder,” Ramaswamy said.

“Climate change plans; emissions caps; diversity, equity, inclusion quota systems for race and gender on boards; et cetera,” he said. “They use our money to advocate for those principles in corporate America that makes companies less successful.”

ESG is the main obstacle preventing the oil and gas industry in the U.S. from meeting “the needs of Americans at a time when there’s a massive supply-demand imbalance,” Ramaswamy warned.

Ramaswamy added that “as recently as 2018, the U.S. was the world’s largest producer of energy. How quickly things have changed now with the U.S. president groveling in front of foreign dictators around the world, begging them to produce more oil that the U.S. could be producing instead.”

The U.S. under former President Donald Trump surpassed Saudi Arabia in 2018 to become the world’s largest producer of petroleum, according to the U.S. Energy Information Administration. Just four years later, President Joe Biden met with Saudi Crown Prince Mohammed bin Salman in a visit that was at least partly geared toward getting the Saudis to “increase the supply” of oil for the U.S., if The New York Times’s quote of Biden is any indication.

But the U.S. energy crisis that precipitated Biden’s humiliating trip to Saudi Arabia was no accident, Ramaswamy said.

Ramaswamy explained that Biden is simply “making good on a campaign promise” from September 2019 when Biden said “I guarantee you we’re going to end fossil fuels.”