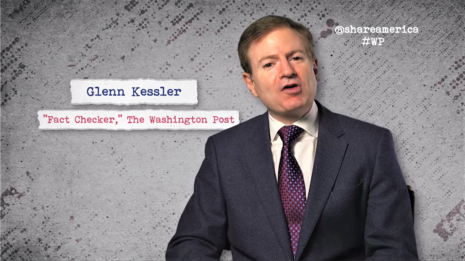 The Post’s liberal fact-checker Glenn Kessler called out Biden for an over-the-top statement he made in a May 30 op-ed about his American Rescue Plan: “A dozen CEOs of America’s largest utility companies told me earlier this year that my plan would reduce the average family’s annual utility bills by $500,” Biden said.

Kessler fired back at the president’s blatant misinformation: “He didn’t hear that from utility executives. And the report he is citing is not about household utility-bill savings. Most of the claimed savings comes from the reduced cost of driving. And the estimate is for 2030 — when he would no longer be president, even if he served a second term. Is there any doubt the president earns Four Pinocchios?” [Emphasis added].

Kessler dismantled Biden’s farfetched promises on energy piece by piece: “This line caught our attention. After all, the typical U.S. family spends $2,060 on average per year for home utility bills, according to the most recent estimate published by EnergyStar.gov. So Biden is promising big savings. But it turns out the White House has been engaging in some inflation of its own.”

The president’s reference to a $500 reduction in utility bill prices for American families relied on a tangential October 2021 study by the Rhodium Group, Kessler explained. “Rhodium predicted that if Biden’s climate change policies were adopted, by 2030 ‘national average annual household energy costs’ would be ‘roughly $500 lower than under current policy.’”

One problem, of course, is that 2030 is still eight long years away. But Americans need help now, CNBC host Becky Quick noted. In a discussion about the same Biden op-ed where the president vowed to “bring inflation down,” Quick said that the Biden administration’s so-called “plan” would not help Americans in the short term.

“None of those steps, really, are going to address the skyrocketing costs that people have seen at the gas pump, or in line at uh, the food, grocery store, or what they’ve seen at their, in rent prices and things that have gone up,” Quick said in a recent interview with White House National Economic Council Director Brian Deese.

And even worse than that, “household energy costs” are not remotely the same thing as the household utility bills that many Americans struggle to pay every month, Kessler pointed out.

But what does the Rhodium report actually say about Biden’s climate plan?

The report noted that the Biden climate plan would potentially lower home electricity bills by 2030 between one dollar more and five dollars less than now. “That might pay for an extra ice cream cone over the summer,” Kessler said.