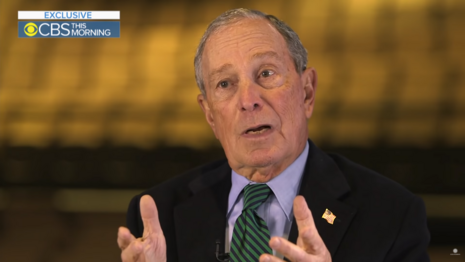 Michael Bloomberg, a failed 2020 presidential candidate with a net worth of $70 billion, according to Celebrity Net Worth, is throwing a whopping $242 million at achieving his long-standing goal of ending coal production across the world. Bloomberg’s pledge to kill off coal also marked “the first phase of his commitment at COP26 in Glasgow to help shutter or cancel a quarter of the world’s coal plant capacity,” according to Bloomberg Philanthropies. Bloomberg himself proclaimed, “‘We’ve already helped close more than two-thirds of U.S. coal plants, and more than half of Europe’s, faster than almost anyone thought was possible, while also reaping economic benefits.’” [Emphasis added].

Bloomberg attended a Sustainable Energy For All (SEforALL) conference that began on May 17 to articulate his radical climate vision to green elites like U.N. Secretary-General Antonio Guterres. Guterres’s comments were even more extreme: “The addiction to fossil fuels must end, starting with coal, by 2030 in OECD countries, and 2040 everywhere else. And we must leave no one behind.” But Bloomberg and Guterres’s shared vision of a world without coal seems at odds with SEforALL’s self-declared goal to support “affordable, reliable, sustainable and modern energy for all by 2030.” SEforAll’s website says 759 million people don’t have electricity access, a problem that coal — once the world’s most abundant energy resource, according to the World Energy Council — might help solve.

But this wasn’t the first time that Bloomberg has fought to cripple American energy production and make life harder for regular people. The former biparty mayor of New York City dumped hundreds of millions of dollars into the 2020 election to back Democrats who “share[d] his views on climate,” according to Axios. And even worse, he dedicated a cool $500 million to wipe out coal and natural gas production in the U.S. back in 2019.

The 12th richest man in America even called the closure of more than 66 percent of coal power plants in the U.S. a “success.” “We have to spread that success around the world, especially in developing countries that have contributed the least to the climate crisis but are facing the most severe effects,” Bloomberg said. “This support will help ten countries with enormous clean energy potential seize the opportunity and avoid building new coal plants.”

Bloomberg Philanthropies also announced it would “strengthen” its partnership with the leftist ClimateWorks Foundation to phase out coal across the world. ClimateWorks has been linked to the “‘greening of the Belt and Road Initiative,’ a global trade infrastructure project pushed by Chinese President Xi Jinping to link China with the rest of Eurasia,” according to Capital Research Center.