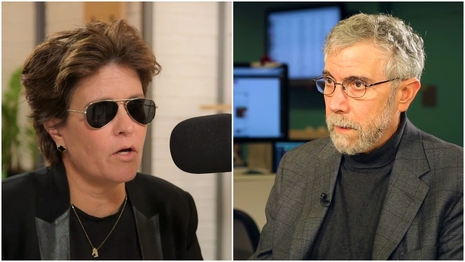 The same economist who admitted he got “inflation” wrong claimed the economy is thriving under President Joe Biden. At this point, flipping a coin is probably more accurate at predicting the future than New York Times columnist Paul Krugman.

America has “a really good economy with a couple of problems,” Krugman said during left-wing tech reporter Kara Swisher’s podcast, Sway. “It’s the best job market possibly ever. It’s easier to get a job than it was during the height of the Clinton era boom, which is great.” Sure, wages “aren’t quite” keeping up, and “rents are up in small towns,” but that’s all in people’s minds, Krugman said. “People’s perception of the economy does seem to be way out of line with how bad things really are.” And if those comments weren’t out of touch enough, Krugman suggested that “this economy’s been pretty good” for poor people.

That's easy to say for a guy with a reported net worth of $2.5 million.

This is the same Krugman who said in January that he didn’t “understand what the hell has been going on” with inflation, which spiked to 8.5 percent over the last year. It was the largest increase since the Raiders of the Lost Ark hit the box office in 1981. He also absurdly stated that the highest inflation in 40 years was “not a crisis” on Bloomberg TV in February.

Krugman defended Biden on Swisher’s podcast because, “If there’s one thing that Joe Biden really has very little he can do about, it’s the price of gasoline,” Krugman said. “No U.S. President can do very much to affect that price.”

But not all experts agree. Continental Resources founder Harold Hamm wrote in a Wall Street Journal op-ed that “one thing stands in the way” of lower gas prices: Biden. “President Biden’s unwillingness to reverse course on his administration’s commitment to put the American oil-and-gas industry out of business” comes “at the consumer’s expense,” Hamm wrote.

Biden has tapped the Strategic Petroleum Reserve three times to increase the U.S. oil supply. The first two times, gas prices dropped for a short time and then climbed again, according to The Wall Street Journal. The most recent release of the reserve, the largest ever, is still ongoing.

Swisher later cited an Associated Press-NORC Center for Public Affairs Research poll to Krugman. The poll found 65 percent of Americans disapprove of Biden’s handling of the economy. She asked, “How big of a problem is this for Democrats going into the midterms, where they risk losing control of both the House and Senate?”

Krugman responded that it is a “huge problem. And the issues for which people most blame whoever’s in power on economics tend to be the things over which that person has the least control or influence, right?”

In a March 24 op-ed headlined “How High Inflation Will Come Down,” Krugman claimed high inflation will be “temporary,” noting the Fed “believes” it can reduce inflation “relatively painlessly.”

Conservatives are under attack. Contact The New York Times at (855) 698-1152 and demand the outlet stop publishing outright pro-Biden propaganda on gas prices and inflation.