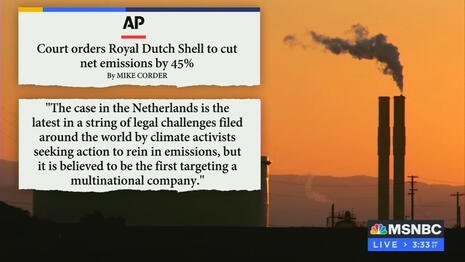 The Associated Press recently celebrated an $8 million cash infusion from left-wing mega-donors to fund a small army of eco-journalists.

The Associated Press (AP) declared on Feb. 15 that “it is assigning more than two dozen journalists across the world to cover climate issues.” The announcement of the $8 million in funding marked the “largest single expansion paid for through philanthropic grants” in AP history.

Climate Depot founder Marc Morano put it best: “The AP will now have zero 'obligation to serve as watchdogs over public affairs and government' and instead be approved messaging lapdogs to their paymasters. Will the AP ever offend [its] donors and look critically at the UN IPCC climate panel? Or NASA? It's a laughable thought.” The organizations that opted to exchange cash for influence included left-wing organizations like the William and Flora Hewlett Foundation, The Quadrivium Foundation, The Rockefeller Foundation and the Walton Family Foundation.

AP referenced an earlier time, when it suggested news agencies were more independent: “For many years, Journalists and philanthropists were more wary of each other. News organizations were concerned about maintaining independence and, until the past two decades, financially secure enough not to need help,” [emphasis added].

So what changed? AP explained the journalism industry’s need for “philanthropy” since its “financial outlook has been otherwise bleak.” But this flies in the face of independent journalism. The Society of Professional Journalists Code of Ethics states journalists should “[a]void conflicts of interest, real or perceived.”

The Hewlett Foundation gave at least $583,165,182 in grants to the ClimateWorks Foundation from 2008 to 2020, according to Foundation Directory Online. ClimateWorks has been linked to the “‘greening of the Belt and Road Initiative,’ global trade infrastructure project pushed by Chinese President Xi Jinping to link the communist country with the rest of Eurasia,” according to investigative think tank the Capital Research Center.

The Rockefeller Foundation has a sordid history of extremism. The Rockefeller Archive Center, a research center and grantmaking organization, documented the group’s funding of population control research in the past. Additionally, “Dean Rusk, who served as Rockefeller Foundation president in the 1950s, led an effort to dramatically expand federal population control funds when he served as Secretary of State in the Kennedy and Johnson administrations,” Influence Watch reported.

The Walton Family Foundation of Walmart fame also got in on the climate action. It awarded at least $64,597,090 in grants to the Environmental Defense Fund (EDF). The EDF held a string of events in 2020 that exploited the Marxist Black Lives Matter protests and riots to rail how “[c]urrent demands for racial justice have put the spotlight on environmental racism.”

Quadrivium is another environmentalist sponsor. Under James Murdoch, the son of News Corp. Executive Chairman Rupert Murdoch, Quadrivium flexed its climate change financing muscles. Quadrivium gave at least $14,250,000 to the same radical EDF from 2013 to 2019.

Conservatives are under attack. Contact The Associated Press at (212) 621-1500 and demand it reject climate alarmism.