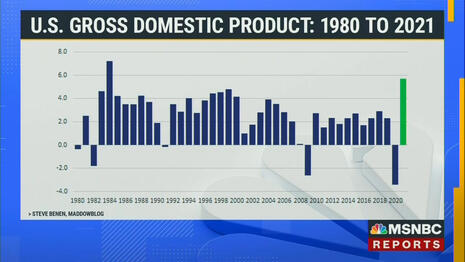 The Washington Post championed a report from the Bureau of Economic Analysis showing a 5.7 percent increase in gross domestic product (GDP) last year as the “latest snapshot of a resilient recovery” in President Joe Biden’s economy.

The Post was quick to celebrate the seemingly positive economic news but glided over the roles that COVID-19 stimulus money and inflation played in the rise of GDP. The Post fawned in a story headlined: “U.S. economy grew 5.7 percent in 2021, fastest full-year clip since 1984, despite ongoing pandemic.”

Much ado about nothing. The news of a Biden boom was, simply, headline clickbait, as Oxford Economics Chief U.S. Financial Economist Kathy Bostjancic reportedly explained in comments to Yahoo! News: “What’s more, beneath the headline GDP print, the handoff to 2022 is weak, with consumer spending retrenching in December and Omicron dampening economic activity.”

The spin masters at The Post, however, cracked out number after number to supposedly prove the good news for Biden: The rise in GDP signified “a powerful rebound from 2020, when the economy contracted by 3.4 percent.” And who could forget “2021’s strong growth created a record 6.4 million jobs?”

6.4 million jobs sounds great, but reality is harsher than fiction, and Axios gave one such reality check on Jan. 31. “Job growth numbers may be about to turn negative for the first time since President Biden took office,” reported Axios.

The Post’s narrative was also undercut by ADP Chief Economist Nela Richardson’s recent statement on CNBC that the economy “hasn’t added one single job from the 2019 high watermark. Not one. All the jobs that we have seen gained are recovered jobs that were lost.” So much for the “strong growth” claimed by Biden’s cheerleaders at The Post.

But The Post doesn’t give up. “The growth came in fits and starts, with a burst of government spending helping propel a fast start, even as a surge in new cases and deaths in the second half of the year created additional pressures,” The Post wrote. [Emphasis added].

But reporter Ben Casselman at The New York Times acknowledged in an article from Jan. 27 that inflation obscured the reality behind the “growth.”

Casselman argued that “[i]nflation-adjusted gross domestic product (the dark blue line) has rebounded sharply since the early months of the crisis, but has yet to return to its prepandemic trend.”

The subheadline for Casselman’s story also stated: “The nation’s G.D.P. has outpaced the growth rate that preceded the pandemic, until you take higher prices into account.”

Former CEO of CKE Restaurants and Senior Fellow at the Pepperdine University School of Public Policy Andy Puzder asked in a Fox News op-ed published on Jan. 31: “[D]oes Biden deserve … credit” for the growth in GDP?

Pudzer remarked: “With our economy shut down, GDP understandably declined by a significant 3.4%, the largest drop since at least 1948. So, with the bar set at an historic low of -3.4% in 2020, GDP naturally rebounded in 2021. No surprise here.”

Conservatives are under attack. Contact The Washington Post at (202) 334-6000 and demand it quit trying to propagandize about President Joe Biden’s atrocious economy.