Brad Pitt doesn’t realize the government is made up of people, not all of them millionaires like him... 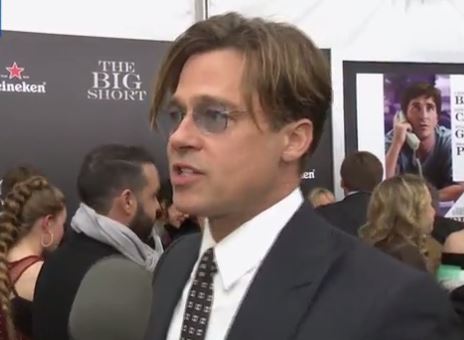 In a rambling Dec. 2 interview with The Hollywood Reporter, the actor/director with a net worth of $240 million used his upcoming anti-capitalist movie, The Big Short, to lash out at Wall Street.

Pitt told The Hollywood Reporter that he likes The Big Short (which stars Christian Bale, Ryan Gosling, and Steve Carrell) because “it tries to explain to people how they got screwed” during the 2008 housing bust.

Pitt even hopes his movie pushes the public to “begin asking questions,” and causes the government to enact “tougher regulations and more safeguards and certainly an overhaul of the ratings agencies. It would be my dream.”

When asked whether he thought people should be jailed “for what they did to the financial system,” Pitt said, “I think people should have been held accountable, yes I do. What we’re seeing now is that greed is still alive and kicking, and banks are bigger than ever.”

Before going after the wealthy again, Pitt should probably check his own banking app. As the 29th highest paid actor, he may want to change his anti-capitalist rhetoric.

And while he’s at it, he may want to re-think some of his past rhetoric as well. In August 2010, for example, UK’s Daily Mail reported that Pitt “would consider the death penalty for those to blame for the Gulf oil spill crisis.”

Pitt recently lectured the US for being wary of foreigners in the wake of the Paris attacks by saying “understand everyone has self-interest and that we are now in a community. We are not an island and we don't always know best so let's check ourselves.” An interesting response to terrorism.