In anticipation of his town hall meeting with the president, José Díaz-Balart dedicated a little over an hour and a half of his four prior broadcasts of The Rundown to the subject of immigration and to the battle over the funding of the Department of Homeland Security (DHS). While he occasionally hosted conservative voices on these issues, he overtly sacrificed his objectivity on the altar of advocacy in a number of ways.

Díaz-Balart downplayed the conservative contention that Obama's completely exceeded his constitutional authority, insisting to guests that Obama's the only one that's moving the issue forward (so who really cares about the niceties?) As he summed up Tuesday:

JOSE DIAZ-BALART: President Obama's preparing to tackle immigration head on when he sits down with me for an exclusive town hall right here on MSNBC and Telemundo. It comes at a very critical moment. Just yesterday the Justice Department asked a federal judge in Texas to lift his own ruling that froze the White House plan on immigration designed to shield up to 5 million undocumented immigrants from deportation.

He openly sympathized with amnesty and its advocates, like Krystal Williams, executive director of the American Immigration Lawyers Association:

DÍAZ-BALART: You guys do an extraordinary job, really helping so many people that live in fear. But the confusion is it seems because they hear the president say "I've done this for you. This, go ahead, do it." And then all of a sudden the judge out of, you know, for them, out of nowhere comes and freezes it just hours before it was going to take effect. How is this playing out in the community that is going to see possibly 5 million people get some form of reprieve?'

He repeatedly emphasized how important it is to discuss the human angst of illegal immigrants who want to be "shielded" by Obama. On Tuesday, with Julio Ricardo Varela of Latin Rebels/Futuro Media, Díaz-Balart didn’t even disguise his own emphasis on the “personal” character  of the debate:

JULIO RICARDO VARELA: That, Politics aside, you know, this is a personal issue-

VARELA: -for so many people. And that's what's getting lost in this entire debate.

DÍAZ-BALART: Yeah. I try to bring that up all the time. I appreciate you doing that.

He also hit this point on Friday and further admitted his own biased coverage:

DÍAZ-BALART: Another real human side of the immigration story. Something we highlight week in and week out on The Rundown and something that will be front and center at our town hall with President Obama next Wednesday. The president himself did the same while announcing his executive actions exactly three months ago today. Actions that are now on hold.

DÍAZ-BALART: That would be Astrid Silva a dreamer seen here with the president the day after the announcement. She arrived in the U.S. when she was four, spoke no English and today working on her third college degree. But since 2001, her father has faced deportation and the President's plan would keep her and her family together.  Once again, Astrid Silva joins me from Las Vegas. Astrid what a pleasure to see you.

On the other hand, Díaz-Balart aggressively fought like a partisan against the Republican guests he interviewed, like Rep. Sean Duffy on Friday:

DÍAZ-BALART: Hey, Congressman I want to start with you. What message would you have for someone like Astrid who, you know, got here through no fault of her own, when she was 4-years old and she knows know other country and yet lives with a very real fear of family separation?

REP. SEAN DUFFY: And I admit, there is real fear in the community and we have to acknowledge that, but what I pick up is she thinks the president's executive overreach is the end all, be all solution for her and her family. The truth is, it's not. And I think that’s, the president and the administration has misrepresented what they're doing. This is only a short-term solution. This is not a long-term solution-

DUFFY:-for us. But what we need to do-

DÍAZ-BALART: But it’s better than nothing.

DÍAZ-BALART:  It’s dealing with an issue that every day is causing families to be separated. 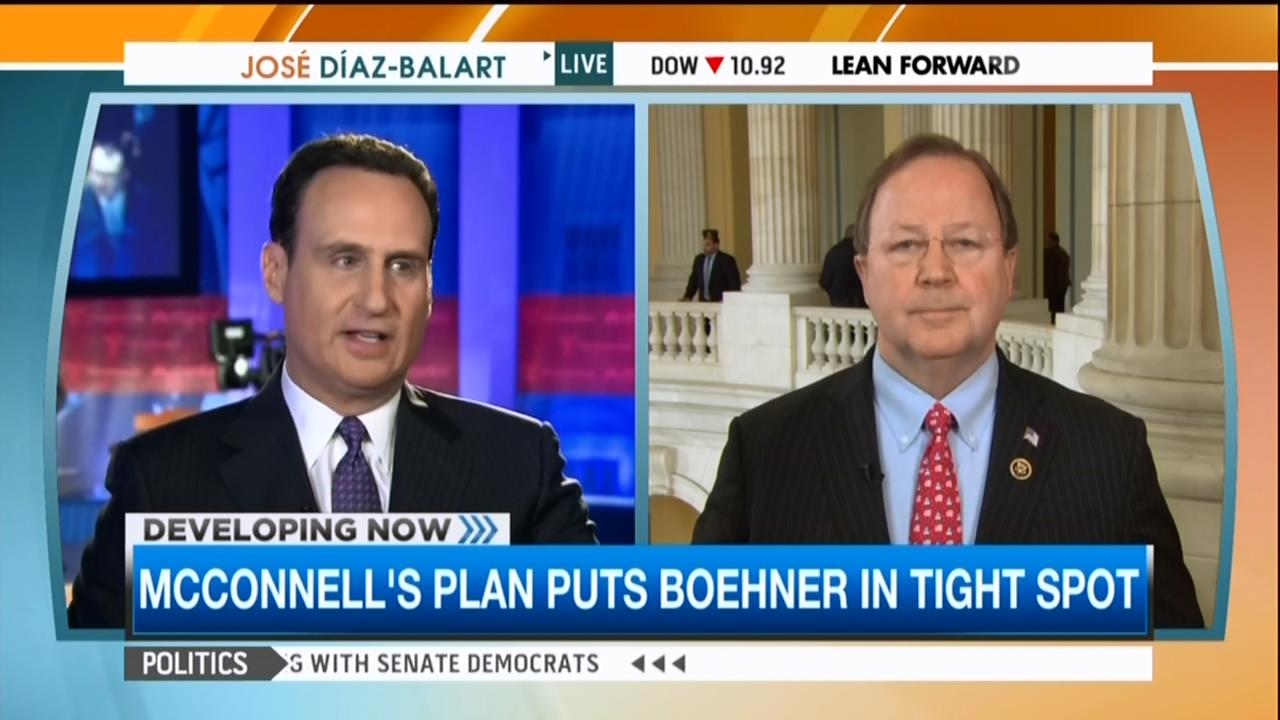 DIAZ-BALART: There are a lot of people that have U.S.-born children that have been here a long time and find that no one really cares about their situation. Don't you think that's important to be discussing as well as people dealing with this problem from a legal perspective?

DÍAZ-BALART: But nobody in Congress does anything.

FLORES: Well, no that's not true. The problem is the president's unlawful actions have basically been to put a stick in the eye of congress and say "I am going to do whatever I want to, irrespective of what the constitution says his limited authority is." And that’s the problem. He is the person single-handedly responsible for holding up any discussion about immigration reform, and so I lay the blame purely at the steps of the white house because of the stick that he has put in the eye of congress, and how he’s ignored the constitution. So if he really wanted to do this right, he would get in his car, and come on down to Capitol Hill-

FLORES: -- and we could sit down and have the conversation, but he has to stop the unlawful action first.

In the end, Díaz-Balart was not reporting the news on the president’s power grab or the fight over DHS funding in these broadcasts. He was doing a dress rehearsal for his town hall with the president. On both occasions he displayed little interest in grilling the Democratic establishment on Obama’s executive overreach and emphasized the “human side of the immigration story" to the point where he drowned out much of the conservative concerns over the rule of law.