Chickens came home to roost yesterday at the Associated Press.

The AP, the economy's most consistent cheerleader when a Democrat is in office, has not only been ignoring and downplaying the significance of disappointing and negative reports for several months, pinning its claim that all is well on the streak of seasonally adjusted 200,000-plus job gains seen during the past 12 months. It has also been pretending that all is really well. Just a week ago, the wire service's Martin Crutsinger falsely touted how the economy's "growth spurt" since the recession ended 5-1/2 years ago, while "sluggish," has been "one of the most durable since World War II."

The bloom fell off that rose — or, I should say, ruse — yesterday, as the Labor Department reported that the economy added just 126,000 jobs in March, and revised January and February down by a combined 69,000.

Economics reporter Josh Boak opened his Friday afternoon report by telling readers that "For months, the U.S. economy's strength has been flagging." In other words, "My colleagues and I have been pretending 'for months,' and we can't keep up appearances any more."

Not that the AP's headline writers didn't keep trying. As will be seen, they tried to limit the perceived damage to the "job market," when the problems are across the board (bold are mine): 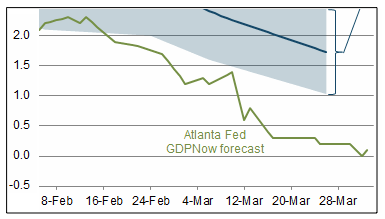 For months, the U.S. economy's strength has been flagging.

In March, the economy's slump finally overtook the job market.

The AP, and to a lesser extent the other primary business wires, has been been hiding this "month after month" economic "slump" for months, and acting as if an employment market adding disproportionately low-paying jobs at a not really that robust pace — especially given all of the potential workers on the sidelines — would somehow pull the other economic indicators back up to acceptable levels. It has always been far more likely that declines seen elsewhere would finally become visible in the jobs statistics.

Boak also predictably hedged by citing the weather and other alleged one-off factors:

... Was the tepid job gain a temporary blip due mainly to a harsh winter and an economy adjusting to much lower oil prices?

Or did it mark a return to the middling performance that's defined much of the nearly 6-year-old recovery from the Great Recession?

No one will know for sure until the government's monthly employment reports later this spring help gauge the direction of the job market. That leaves the U.S. economy - until very recently the envy of other industrialized nations - facing a renewed sense of uncertainty.

"We knew less than we thought we did," said Tara Sinclair, a George Washington University professor and chief economist at Indeed, the job-posting web site.

The optimistic view is that much of the weakness will pass. An unseasonably cold March followed a brutal winter that slowed construction and other key sectors. A since-resolved dispute at West Coast ports might have briefly disrupted trade.

Last month's subpar hiring could make the Federal Reserve less likely to start raising interest rates from record lows in June, as some have been anticipating.

That comment from the GWU prof needs a revision. It should read: "We knew more than we were willing to tell the public we're supposed to be informing."

Meanwhile, this fictionally "durable" but in reality very fragile economy pins its hopes for avoiding yet another quarterly contraction, of which there have already been two since the recession officially ended in mid-2009, on the indefinite continuation of Keynesian government-deficit stimulus and nearly free money. Yet somehow, the 1980s economy, facing 20 percent interest rates and 13 percent inflation, recovered far more robustly by doing the opposite of what the Keynesian geniuses recommended.

Finally, in a complete non-suprise, Boak failed to inform readers that forecasts for first-quarter growth are now as low as the annualized 0.1 percent seen at the Atlanta Fed. Even the optimists at Moody's are, as of Friday, predicting only 1.1 percent.