Over at Hot Air, I saw that Seth Meyers, as he was figuratively grilling Texas Senator Ted Cruz on his "Late Night" program — the first rule of these shows is that conservatives get attacked, while liberals get coddled — made his case for global warming by saying, “I think the world’s on fire literally.” I checked outside just a moment ago and "literally" saw no burning bushes or other burning objects, so I can say that Meyers, at least in regards to this small corner of the world, is "literally" wrong. In the language of Politifact, the leftist pretend-fact check site, he has his "pants (figuratively) on fire."

One would think that a fact-checking web site would have gone after Meyers for his out-of-control hyperbole. Not a chance.

Instead, Politifact's Lauren Carroll went beyond what was seen last week at the Washington Post, which could not bring itself to admit that Cruz told a relevant truth when he observed that the federal tax code has far more words than the Bible. Carroll went full Orwell, labeling Cruz's absolutely correct observation that there has been no evidence of global warming in satellite-based data for 17 years "Mostly False."

You see, dear readers, Cruz, in commenting on "only" 17 years of data, was "cherry-picking," and that's just not fair (HT Twitchy; bolds are mine):

Ted Cruz's world's on fire, but not for the last 17 years 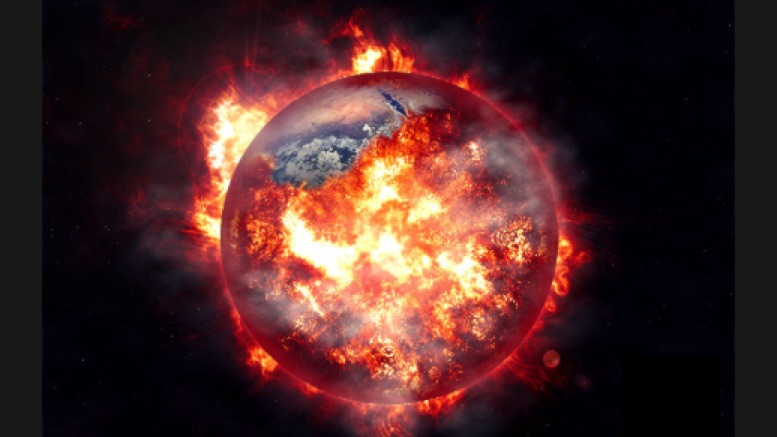 ... On Late Night with Seth Meyers March 17, host Meyers brought up an incident that had happened several days earlier -- in which Cruz seemed to frighten a 3-year-old girl when he said "Your world is on fire." (He was talking about foreign policy.)

"At first I got excited because I thought maybe you were coming around on global warming, but that’s not the case," Meyers said. "Because I think the world’s on fire -- literally."

Cruz responded, "My view actually is simple. Debates on this should follow science and should follow data. Many of the alarmists on global warming, they’ve got a problem because the science doesn’t back them up. In particular, satellite data demonstrate for the last 17 years, there’s been zero warming. None whatsoever. It’s why -- you remember how it used to be called 'global warming' and then magically the theory changed to 'climate change'? The reason is it wasn’t warming, but the computer models still say it is, except the satellites show it’s not."

We’ve fact-checked statements like Cruz’s before -- that global warming has stopped over the past 17 years, and that’s reason to be skeptical of accepted science about global warming -- and found the claims lacking.

... Cruz does have a point: There hasn’t been any significant warming over the past 17 years. However, the scientific mainstream counters that it’s misleading for climate change skeptics to assume this flat trend line will continue indefinitely, or that it negates the long-term likelihood of global warming.

Let's rephrase that final sentence: "However, the skepics counter that it’s misleading for the so-called climate change mainstream to assume this flat trend line won't continue indefinitely, that it doesn't diminish the likelihood of long-term global warming, or that it doesn't possibly signal a course reversal into global cooling."

However, focusing on that period essentially means cherry-picking a timeframe that starts at an extremely warm year and ignores that the first decade of the 21st century -- even as it’s been stable -- has been the warmest on record. While scientists don’t deny that there’s been a recent "pause" in warming, they expect it to be a temporary trend. Not only is one anomalous period not enough to undercut longer-term projections, but other types of measurements do show evidence of continued global warming over the past two decades, including rising ocean temperatures and shrinking sea ice.

Cruz’s statement contains an element of truth but ignores critical facts that would give a different impression, so we rate it Mostly False.

Ocean temperatures aren't rising, and there is some evidence of serious data manipulation issues in the ocean-related data (and elsewhere). Antarctic sea ice has recently reached record levels.

Cruz's statement to Meyers was and remains absolutely true.

As a result, I rate Lauren Carroll's work "Completely Lame."