Many media myths won't die because those who should know better — and I believe in many cases do know better, and don't care — perpetuate them.

One can't divine his mindset, but Politico's Michael Crowley, in his coverage of Benjamin Netanyahu's resounding Tuesday electoral victory, did his part to continue the myth that the Israeli Prime Minister's "March 3 speech to Congress (was) arranged by Speaker John Boehner behind the Obama White House’s back." It wasn't, and claiming that it was a million times won't change that.

The myth got its start when The New York Times, in what was arguably a passive-aggressive attempt to create the myth, published the original lie, and then quietly corrected it.

As I noted in late January, Thomas Lifson described the four-step process perfectly in a post at American Thinker (typos in original corrected; links are in original; bolds are mine throughout this post):

Step One: Manufacture outrage against PM Netanyahu, Israel, Speaker Boehner, and Republicans with an agit-prop exercise, falsely claiming that President Obama was not consulted before an invitation was issued and accepted for the Israeli leader to address Congress.

Step two: Quietly issue a correction that nobody but a few people notice. Leave the impression of the false story in the minds of most.

Step three: Use that false impression as an excuse to cut Israel out of the “peace plan” put forward by the administration.

... Step four (forthcoming): Pillory Israel for balking on a “peace plan” it had nothing to do with creating, and which almost certainly will prove prejudicial to its survival.

Fortunately, Step 4 in the Times's gambit didn't work out, as the ultimate goal, with the outrageous and hyprocritical help of Team Obama apparatchiks partially supported by U.S. taxpayer dollars, was to unseat Netanyahu.

But, as will be seen in the excerpt from Crowley's Politico piece, the myth created by the Times's original false story survives, because Crowley either chose to perpetuate it, or didn't know any better (numbered tags are mine): 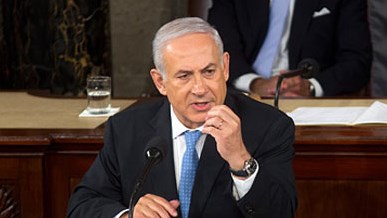 Bibi wins big
As Netanyahu seems set to return to power, his relations with the Obama White House appear to reach a new low.

Barack Obama might have hoped for a leadership change that would reboot his poisoned relationship with Israel’s government. But he didn’t get it on Tuesday, when Israeli Prime Minister Benjamin Netanyahu — thanks in part to a hard lurch right — made a dramatic comeback after trailing in pre-election polls.

... Netanyahu will likely emerge strengthened, leading a more conservative coalition than he did before — and likely emboldened in his conflicts with the Obama administration over how to defend Israel.

The results were demoralizing for Democrats who consider the Israeli leader tantamount to a partisan rival — particularly since Netanyahu’s March 3 speech to Congress arranged by Speaker John Boehner behind the Obama White House’s back. [1] In Herzog, Obama officials saw a possible fresh start with Israel on issues like the Israeli-Palestinian peace process and Iran’s nuclear program.

“They hate him, they should, and they’re praying that he is out of power,” said a former senior Obama administration official [2] as early returns came in Tuesday night.

... Netanyahu also cast himself as the target of foreigners [3] — and while he was vague about the details, pro-Netanyahu media outlets often cited the role of former Obama campaign operative Jeremy Bird, who advised a grass-roots campaign organization that opposes Netanyahu. That group also partnered with the Washington-based OneVoice Movement, an international grass-roots group that supports the two-state solution and has taken State Department funding in the past.

[1] — Here is the text of the Times's Jamuary 30 correction to its original January 29 article about Netanyahu's speech:

Correction: January 30, 2015
An earlier version of this article misstated when Prime Minister Benjamin Netanyahu of Israel accepted Speaker John A. Boehner’s invitation to address Congress. He accepted after the administration had been informed of the invitation, not before.

So the speech wasn't arranged "behind the Obama White House’s back," and Crowley's contention has been false for almost seven weeks.

[2] — My, my. "Hate" is such a strong word to use on the leader of a nation which is supposed to be our ally. One has to wonder when the Democrat-dominated Jewish community in the U.S. will wake up and understand that this administration is indifferent at best to its desire for Israel to continue to exist as a free and sovereign nation.

[3] — Memo to Michael Crowley: Netanyahu was "the target of foreigners," and it's not arguable, as you even admitted later in the very same sentence.

Several members of the establishment press telegraphed ahead of the election that they really relished the opportunity to dance on Bibi's politial grave. Their bitterness over Netanyahu's decisive victory is palpable, and they're resorting to perpetuating myths about the events leading up to it and about the reasons he won.