In his Friday Washington Post column, Dana Milbank accused Scott Walker of "cowardice" which "ought to disqualify him as a serious presidential contender."

Walker's alleged "cowardice" was his failure to disown the following remark made by New York City Mayor Rudy Giuliani: “I do not believe that the president loves America.” Last time I checked, Rudy's entitled to his opinion, and Walker's entitled to opt out of psychoanalyzing the Oval Office's current occupant. This sent Milbank into a blind fury (bolds and numbered tags are mine):

As the world now knows, Giuliani, the former New York mayor, said at a dinner featuring Walker, the Wisconsin governor, that “I do not believe that the president loves America.” According to Politico, Giuliani said President Obama “wasn’t brought up the way you were brought up and I was brought up, through love of this country.” 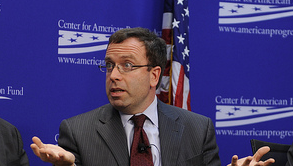 And Walker, just a few seats away, said ... nothing. Asked the next morning on CNBC about Giuliani’s words, the Republican presidential aspirant was spineless: “The mayor can speak for himself. I’m not going to comment on what the president thinks or not. He can speak for himself as well. I’ll tell you, I love America, and I think there are plenty of people — Democrat, Republican, independent, everyone in between — who love this country.” [1]

But did he agree with Giuliani? “I’m in New York,” Walker demurred. “I’m used to people saying things that are aggressive out there.”

... That dinner Wednesday, at New York’s 21 Club, is where Giuliani challenged Obama’s love of country. Even the former mayor preceded his outrageous allegation by saying, “I know this is a horrible thing to say ...” [2]

Walker surely knew it was horrible, too, but he refused to say so — and in this failure he displayed a cowardice unworthy of a man who would be president. [3]

[1] — What really sets Milbank off is that Walker's answer is perfect. He is under no obligation to agree or disagree with Giuliani's opinion, because it's just that: one man's opinion. Walker is under no obligation to have one, and can't know for certain what is in President Barack Obama's head. Walker can, and he did, express his own opinion about his love of country. Milbank is just upset that Walker, who has demonstrated some pretty impressive ambush-detecting acumen thus far, didn't take the bait.

[2] — Clueless Milbank doesn't understand why Giuliani described his statement as a "horrible thing to say" (or perhaps he does, and is too, well, cowardly to admit it). What Giuliani said would indeed be horrible if he is right, because it would mean that the nation somehow elected such a man to the nation's highest office — twice. The former Gotham mayor is certainly far from alone in holding his belief.

[3] — In Milbank's world, the primary measure of a presidential candidate is apparently his or her ability to publicly second-guess others' thoughts the minute someone on their side say something allegedly controversial. Those who want a successful presidency could care less about this. What they want to know is what the candidate himself or herself believes, and what actions he or she would take if placed in charge of the world's (for the moment) most powerful nation.

And while we're discussing poisonous rhetoric, the list of Democrats who have never spoken out against the outrageous things said by luminaries like Howard Dean, Joe Biden, and Debbie Wasserman Schultz is long, and certainly includes presumptive 2016 presidential front-runner Hillary Clinton. She hasn't said a word to anyone about anything for months, while the list of Schultz's outrageous statements and actions alone is long. be consistent, Milbank must assert that Hillary Clinton ought to be disqualified "as a serious presidential contender."

As Jazz Shaw wrote at Hot Air, this is really about the left-dominated media trying to discredit any and all viable GOP presidential candidates:

... The fact that Milbank can publish something like this with a straight face is rather emblematic of how far the Fourth Estate has fallen and the generally sad state of affairs when it comes to mainstream political commentary.

If you want to take Giuliani to task, fine. Have at it. But since when has it become “necessary” for every member of a given party to respond to or disown what someone else has to say? The answer to that one is simple… since the media decided that it was their job to ensure Democrats get elected rather simply reporting on the events of the election. Since when is it the job of every candidate on the trail to monitor each and every syllable uttered by every person out there and either support, decry or disown it? This is no test of leadership, as Milbank implies, but rather a test of the port side media to see if they can sling enough gotcha questions at the wall that one will eventually stick.

One more thing. In unexcerpted text, Milbank claimed that Walker's non-answer a week ago Wednesday to a question about evoluion when he was in England occurred at "the annual Darwin Day observance." I found no evidence that the English "independent policy institute" where Walker spoke made any reference to Darwin in promoting or observing the event. The Washington Post's coverage of Walker's appearance doesn't even contain the word Darwin, let alone Darwin Day.

Besides, Dana, Walker spoke on February 11. Darwin Day is February 12.