By 3 a.m. Eastern time Saturday morning, as seen here, less than 12 hours after the announcement, the Associated Press's "Big Story" page, the collection of current stories the wire service considers especially important, had no stories on Kitzhaber. But there were items on Jackie Chan's son leaving prison, the cricket World Cup, and the Australian Ladies Masters golf tournament.

A Kitzhaber-related item finally got onto the "Big Story" front page sometime later, and is currently still there. "Subpoenas arrive as Oregon governor announces departure" has a time stamp of 3:53 a.m. Obviously, those subpoenas "arrived" during the business day Friday, which ended eight hours earlier (8 p.m. Eastern, 5 p.m. Pacific). About 75 percent of Jonathan Cooper's underlying story covers the governore's resignation earlier that day. So why did it take so long to appear — especially since an 11:47 p.m. version of Cooper's story was apparently unworthy of front-page presence only three hours later? 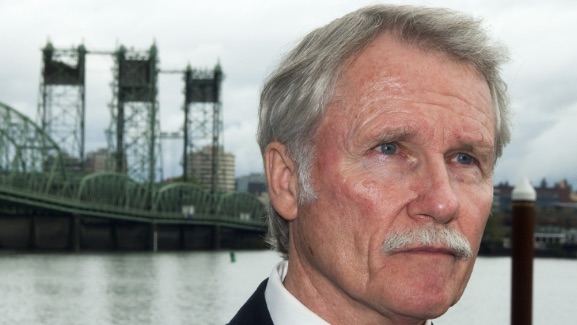 Even the leftist apologists at the Huffington Post were teasing "Feds Launch Massive Investigation Into Scandal-Plagued Oregon Governor" on their front page this morning shortly before 10 a.m.

Earlier this morning in another post, I wrote that "the Governor’s strategically timed Friday afternoon resignation before a holiday weekend will probably go a long way towards minimizing its visibility." It looks like that strategy has largely worked.

It's virtually inconceivable that a story about a Republican or conservative Governor's resignation and related criminal probe would get anything less than saturation visibility at the Associated Press.