Axelrod Book: Suckers! Obama Was Really For Same-Sex 'Marriage' in 2008

In a new book, Obama 2008 campaign manager and longtime Obama adviser David Axelrod reveals that, in the words of Zeke J. Miller at Time.com, "Barack Obama misled Americans for his own political benefit when he claimed in the 2008 election to oppose same sex marriage for religious reasons."

The subheadline at Miller's coverage calls it "A striking admission of political dishonesty from the keeper of the Obama flame." In my view, given that Axelrod wouldn't make such an admission without permission, it's also a juvenile "Nyah-nyah, we fooled you, and you can't do anything about it!" taunt. Additional excerpts from Miller's article follow the jump (HT Michael Walsh at PJ Media; bolds are mine throughout this post):

Axelrod: Obama Misled Nation When He Opposed Gay Marriage In 2008 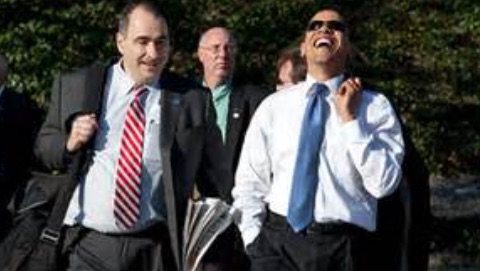 ... “I’m just not very good at bullshitting,” Obama told Axelrod, after an event where he stated his opposition to same-sex marriage, according to the book.

Axelrod writes that he knew Obama was in favor of same-sex marriages during the first presidential campaign, even as Obama publicly said he only supported civil unions, not full marriages. Axelrod also admits to counseling Obama to conceal that position for political reasons. “Opposition to gay marriage was particularly strong in the black church, and as he ran for higher office, he grudgingly accepted the counsel of more pragmatic folks like me, and modified his position to support civil unions rather than marriage, which he would term a 'sacred union,'" Axelrod writes.

The insider’s account provides the clearest look yet at Obama’s long-established flip-flop, one of the blemishes on his record as a progressive. The admission of Obama’s embrace of deception also calls into question the President’s stated embrace of a new kind of politics in 2008, when he promised to be unlike other politicians who change their views to match the political winds.

As a state senate candidate in 1996, Obama filled out a questionnaire saying “I favor legalizing same-sex marriages, and would fight efforts to prohibit such marriages.” But 12 years later as a candidate for president, Obama told Rick Warren’s Saddleback Church that marriage could only extend to heterosexual couples. “I believe that marriage is the union between a man and a woman,” Obama said at the time. “Now, for me as a Christian — for me — for me as a Christian, it is also a sacred union. God’s in the mix.”

Apparently, the Christian God was never in the mix.

So what Politifact called a "Full Flop" in its evaluation of Obama's alleged change in position to full-throated support of same-sex "marriage" in 2012 was really a cynically calculated lie all along.

If you don't recall anyone in the press questioning the inconsistency between Obama's 1996 and 2008 positions, you're far from alone. If there had been such an inconsistency in John McCain's record, it would have been broadcast-level headline news.

The lack of press challenge is yet another reason — one among roughly two dozen documented here (scroll down to get to 2008 campaign; my "roughly two dozen" total omits a few listed items which are actually gaffes) — why those who claim that Barack Obama's defeat of McCain in that year's presidential election was illegitimate have a strong argument. Roughly 570,000 votes switching from Obama to McCain in 8 key states won by Obama would have changed the Electoral College outcome.