Ever since the publication "Earth in the Balance" in 1992, we've seen the press minimize the public's exposure to the more outrageous ideas and quotes emanating from former Vice President Al Gore.

Concerning that original book, Gore's statement that "The internal combustion engine is the greatest enemy of mankind" and his contention that it could and be eliminated in 25 years are hardly known by anyone besides his fevered supporters and attentive opponents. Apparently wishing to rush his timetable for taking everyone out of their cars, Gore, in an idea barely noticed even in the business press, has proposed spending $90 trillion — that's right, trillion — for such an enterprise. After the jump, readers will see how he wants to do it.

From Business Insider, we also learn that former Mexican President Felipe Calderon has gone off the rails (bolds are mine): 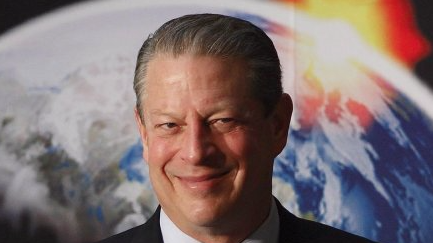 Here’s one way to solve global warming: Spend $US90 trillion dollars over the next few years to redesign all the cities — as in all the cities on Earth — so people live in more densely packed neighbourhoods and don’t need cars.

That is one of the more ambitious (and possibly outlandish) ideas knocking around the World Economic Forum at Davos, Switzerland, this morning. The Davos meeting is the annual conclave of the world’s ruling class: presidents and prime ministers, CEOs, and religious figures (and the thousands of journalists who follow them, hoping for a soundbite or two).

The $US90 trillion cities proposal came from former vice president Al Gore and former president of Mexico Felipe Calderon, and their colleagues on the The Global Commission on the Economy and Climate. That group hopes to persuade the world’s leaders to do something about humanity’s suicidal effort to heat the Earth’s climate.

“We cannot have these cities with low density, designed for the use of cars,” he said. “We recommend those cities should have more density and more mass transportation.” Together with a programme for reforming land use, and bringing deforestation to zero, the total cost of this plan would likely be $US90 trillion in future investment, Calderon said.

... Turns out the $US90 trillion is the total of infrastructure investment that is likely to be spent anyway building and upgrading cities. Gore and Calderon are arguing that it be spent more wisely, to produce cities that don’t incentivise people to burn fossil fuels just to get from A to B.

The key will be to persuade the mayors — again, all the mayors on Earth — that designing new cities this way will be vastly preferable to the old way, in terms of efficiency and prosperity for their residents.

Speaking of dense, apparently Jim Edwards at Business Insider was too dense to figure out the massive degree of coercion which would be necessary for Gore and Calderon's plans to even begin to work. Tens and perhaps even hundreds of millions of people would be ordered to abandon their current abodes, junk their cars and move into their shiny new shantytowns. "Building and upgrading cities" in any way would have to be completely banned. So what would they do about all the resisters? Shut off all power outside of the urban cores?

A reasonably intelligent, non-brainwashed fifth-grader could pick this idea apart in minutes. But apparently the assembled elites at Davos gave it respectful attention.

Of course the Associated Press doesn't have a story on this, and it's almost impossible to imagine that anyone at the establishment press alphabet networks has mentioned or will mention it.

But the does have an item breathlessly telling us that there will be a "'LIVE EARTH' CONCERT TO PRESS FOR CLIMATE ACTION" on June 18, and that:

... pop star (Pharrell Williams) is teaming up with Nobel Peace Prize-winner Al Gore and producer Kevin Wall to pull off a "Live Earth" concert on seven continents to build support for a U.N. climate pact in Paris among more than 190 nations in December.

Don't even think about how much fossil fuel that effort will burn — but it doesn't matter, I guess, because it's all for a politically correct cause.

It's a near certainty the same outlets ignoring Gore's $90 trillion loony tunes idea will be fawning all over him at Live Earth.