CNN's Jim Clancy Melts Down on Twitter Over Paris Massacre's Cause

CNN's Jim Clancy has been with the network for 32 years. His network's bio says that he "brings the experience of more than three decades covering the world to every newscast on CNN International." He also apparently has a lot of pent-up feelings about the Middle East.

Those feelings boiled to the top over Twitter early Thursday. Clancy started it all by claiming that the cartoons published by journalists who were killed in the Charlie Hebdo massacre on Wednesday "NEVER mocked the Prophet. They mocked how the COWARDS tried to distort his word. Pay attention." It went downhill from there, both factually and professionally.

Here is what initially followed:

PJ Media's Susan L.M. Goldberg explains (bolds are mine throughout this post):

To be completely accurate, he dubbed the radical Islamist “pro-Muhammed” mentality that led to the terror attacks “Hasbara.” Hasbara is the term used to describe pro-Israel international PR. What does hasbara have to do with fostering or endorsing radical Islamist terrorism? Nothing. Unless, of course, you’re taken to task for your inaccuracies by a Jew. Then, suddenly, your gross inaccuracies along with all the world’s problems are because of the Jews.

As other Twitter users joined the fray, Clancy went on to accuse both the pro-Israel blog Elder of Ziyon and the openly anti-Semitic “Jews Making News” Twitter feed of being part of an anti-Muslim and pro-Israel PR campaign. As Honest Reporting pointed out, “what does it say about Clancy’s state of mind that he cannot distinguish between a genuine pro-Israel blog site and another that expressly promotes anti-Semitic conspiracy theories?”

When another Twitter user told Clancy that no pro-Israel voices had articulated the positions he was erroneously ascribing to them, the anchor launched into a tirade. “Get a grip, junior. It’s my Friday night,” he replied. “You and the Hasbara team need to pick on some cripple on the edge of the herd.”

While it is unclear what Clancy’s last sentence was intended to mean, his use of the word “cripple” in insulting fashion didn’t escape the notice of disability rights advocates.

As the hole deepened, Clancy on Thursday "spent quite a bit of time ... blocking Israeli tweeters because they had the audacity to disagree with him."

The most complete collection of Clancy's calamitous tweets appears to be at the Elder of Ziyon blog.

Clancy may come to regret the additional scrutiny his conduct precipitated.

In December, Elder of Ziyon noted that the Jordanian Media Institute is an organization which considers Ahlam Tamimi, the "terrorist, responsible for planning and implementation of the Sbarro pizza shop bombing that killed 15" in 2001, a "Success Model."

Clancy's meltdown caused the blog to identify one of the speakers at JMI's May 2013 conference. You guessed it, as found at the JMI's web site: 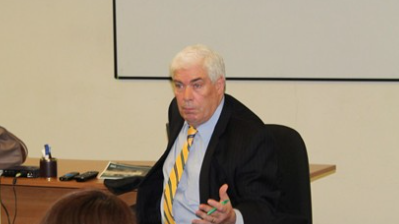 Clancy toured JMI’s facilities and engaged with JMI’s Masters students in an interesting and inspiring talk about his long rich career in Journalism.

Given the network involved, maybe CNN executives don't have a problem with one of its reporters speaking at a conference sponsored by a group which lionizes a terrorist. I would hope that they do. They certainly should.

Instapundit's reaction: "Funny how when their biases peep out, they're always left-leaning, anti-Israel, anti-American biases."

Before Jim Clancy goes out and tries to clean up the rest of the world's apparently misguided thinking about the terrorists' motivations in the Charlie Hebdo Paris massacre, it seems that he'll need to work on at least one of his CNN colleagues. As Matthew Balan of NewsBusters noted earlier this afternoon: "Nic Robertson refreshingly pointed out on Thursday's CNN Tonight that the recent terrorist attack in Paris was part of a wider 'world war all in the name of Islam.'"

Is Robertson part of the "Hasbara team" too, Jim?