On December 3, shortly before the story imploded, Crandall went after Goldberg with a vengeance for supposedly "being out of touch with college realities" and for writing the kind of column which "prevents rape victims from coming forward" (bolds and numbereed tags are mine): 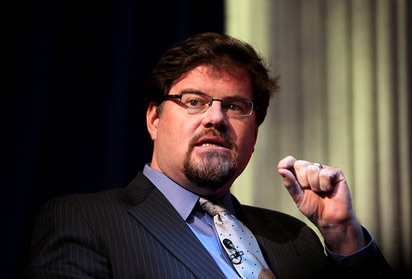 In his recent column questioning allegations of brutal rape at a University of Virginia fraternity, Jonah Goldberg made clear -- though he didn't say explicitly -- that he has never been in a fraternity. [1] In fact, some quick research shows that his alma mater has not had any Greek presence on its campus for decades.

So it's interesting to me, a recent college grad and alumna of a co-ed fraternity, that Goldberg feels he has such authority to discuss the veracity of Rolling Stone's widely read account of a female student who tells of her systematic and brutal gang rape by seven men at the university's Phi Kappa Psi chapter.

Goldberg raises questions about the rape survivor's account that range from offhand (how did she know there were seven if the room was pitch black?) to naive: "The nicknames she hears -- 'Armpit' and 'Blanket' -- sound bizarre, even by fraternity standards.” [2]

... Goldberg further shows his lack of familiarity with the problem of college rape when he calls the victim's friends the "worst ... imaginable" for not immediately reporting her brutal assault. Here, Goldberg fails to appreciate the very real fear of being chastised for reporting a rape. [3] I'm not saying that the friends were right in not reporting it, and I'm not making a judgment on whether or not the assault happened. But it's clear that Goldberg's cultural distance from modern campus life and disregard of the social consequences of reporting an assault render him inadequate to judge the veracity of a rape allegation.

Sadly, Goldberg's piece is the type of ill-informed berating that makes victims of sexual assault afraid to come forward in the first place. [4]

... Remarkably, Goldberg refers to the "rape epidemic" -- yes, in scare quotes [5] -- and criticizes the media for including this story in a broader discussion of what he thinks are questionable sexual assault statistics. Goldberg's skepticism won't prevent any campus rapes; what it risks doing, however, is to further discourage people from coming forward about their sexual assault.

[1] — This is absurd. By that "logic," Diana Crandall has never been a man, so she has no right to publicly comment on men's behavior.

[2] — These, as very odd embellishments in a not-credible story, turn out in hindsight to have been quite legitimate questions.

[3] — The BS meter should have gone off with everyone on this alleged factoid. One "friend," maybe. Several? Virtually no way.

[4] — No ma'am. What keeps people from reporting having been raped is their fear of being lumped in with the shocking and unforgivable "eight to nine percent of sexual assault reports" which "are later determined false." We need to teach women (and probably a few men) not to lie about rape — and meaningfully punish the ones who do.

The (Obama) administration’s crucial and contradictory statistics are validated the usual way, by official repetition; Joe Biden has been heard from. The statistics are: One in five women is sexually assaulted while in college, and only 12 percent of assaults are reported. Simple arithmetic demonstrates that if the 12 percent reporting rate is correct, the 20 percent assault rate is preposterous.

Yet "rape epidemic" advocates won't concede their lie. Until they get serious about accuracy and honest discussion, the term belongs in quotes.

Diana Crandall needs to publicly apologize for her now obviously embarrassing attacks on Jonah Goldberg. If the Times had any integrity, it would demand that she do so as a condition of continuing to appear there.

Don't hold your breath. So far there's no evidence of any remorse at Crandall's Twitter account. As another tweeter noted (HT Twitchy), "Being liberal means never having to say you are sorry."