Huh? NYT Says Hagel 'Wasn't Fired,' But Obama 'Made the Decision to Remove' Him

As is the case with so many executive changes in both the public and the private sector, there is vagueness in the circumstances surrounding the end of Chuck Hagel's stint as Obama administration Secretary of Defense.

While it's not unusual for an exec to be asked to resign to avoid being formally fired, which was apparently the case with Hagel, the higher-ups involved are usually smart enough to pay tribute to the departed official and move on without letting contrary information get out. Apparently not this White House, and not the New York Times — unless their joint mission is to subtly discredit Hagel. The contradictions in today's report by Helene Cooper (saved here for future reference and fair use purposes) seem too obvious to be accidental (bolds are mine): 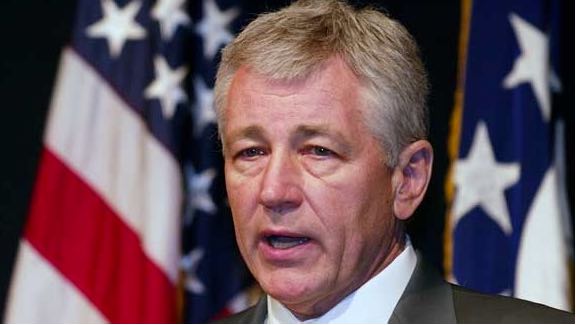 Defense Secretary Chuck Hagel handed in his resignation on Monday, the first cabinet-level casualty of the collapse of President Obama’s Democratic majority in the Senate and the struggles of his national security team to respond to an onslaught of global crises.

In announcing Mr. Hagel’s resignation from the State Dining Room on Monday, the president, flanked by Mr. Hagel and Vice President Joseph R. Biden Jr., called Mr. Hagel critical to ushering the military “through a significant period of transition” and lauded “a young Army sergeant from Vietnam who rose to serve as America’s 24th secretary of defense.”

Mr. Obama called Mr. Hagel “no ordinary secretary of defense,” adding that he had “been in the dirt” of combat like no other defense chief. He said that Mr. Hagel would remain in the job until his successor is confirmed by the Senate.

Administration officials said that Mr. Obama made the decision to remove Mr. Hagel, the sole Republican on his national security team, last Friday after a series of meetings between the two men over the past two weeks.

Mr. Hagel, a combat veteran who was skeptical about the Iraq war, came in to manage the Afghanistan combat withdrawal and the shrinking Pentagon budget in the era of budget sequestrations.

Now, however, the American military is back on a war footing, although it is a modified one. Some 3,000 American troops are being deployed in Iraq to help the Iraqi military fight the Sunni militants of the Islamic State, even as the administration struggles to come up with, and articulate, a coherent strategy to defeat the group in both Iraq and Syria.

“The next couple of years will demand a different kind of focus,” one administration official said, speaking on the condition of anonymity. He insisted that Mr. Hagel was not fired, saying that the defense secretary initiated discussions about his future two weeks ago with the president, and that the two men mutually agreed that it was time for him to leave.

In the real world, we all know that someone who is under pressure to leave ordinarily resigns to save face, and that those who are still around, if minding their manners, try not do anything to inflict any additional harm. But Team Obama obviously didn't mind telling the world through the New York Times, its de facto publicity arm that the President "made the decision to remove" Hagel. Really class act, aren't they?

One also wonders how someone "who had 'been in the dirt' of combat like no other defense chief" is presumptively not qualified to run Defense as the nation moves to what the Times called a "war footing."