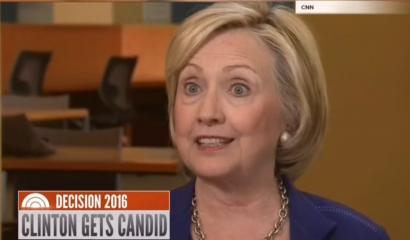 News junkies are accustomed to Obama-scandal stories being ignored by the TV networks, but assume the national newspapers capture all the significant news. That would be wrong. Judicial Watch’s new revelations about IRS bureaucrat Lois Lerner, the FBI and Eric Holder’s Justice Department discussing the prosecution of conservative nonprofits in 2010 drew no newspaper coverage.

The newspapers were barely more interested in a bald-faced untruth in Hillary Clinton’s CNN interview, her claim that she never received a subpoena from the House Benghazi committee. Rep. Trey Gowdy produced a subpoena from March. McPaper (USA Today) couldn’t find the story with two hands, and others weren’t much better:

-- The Washington Post buried it on page A-17 in the fourth column of its “In The Loop” article on the Federal Page, under the tiny headline “Oh, that subpoena.”

-- The New York Times briefly passed over it online in a Maggie Haberman blog post headlined “Hillary Clinton and House Republican Clash Over a Subpoena.” It began:

Representative Trey Gowdy, the South Carolina Republican who is chairman of the House subcommittee investigating the 2012 attacks in Benghazi, Libya, on Wednesday released a copy of a subpoena sent to Hillary Rodham Clinton, a day after she seemed to suggest in an interview that a subpoena was never issued.

According to Nexis, it was originally headlined “Hillary Clinton Says She Wasn't Given a Subpoena, but a Document Suggests Otherwise.” That was apparently too much of a “zinger.” Haberman told CNN on Wednesday that Hillary was wrong in her subpoena claim, but "she is not a natural campaigner" so will need some time to get back in the groove of well, telling the truth.

WASHINGTON (AP) — Republicans on congressional committee investigating the deadly 2012 attacks in Benghazi, Libya, have released a March subpoena issued to Democratic presidential candidate Hillary Rodham Clinton over her use of a private email account and server while serving as secretary of state.

The dispute over the subpoena is the latest flashpoint in an increasingly partisan investigation by the House of Representatives panel, which was created to probe the September 2012 attack in Benghazi that killed four Americans, including the U.S. ambassador.

-- Politico ran a story headlined “Hillary Clinton v. Trey Gowdy: The 2016 contender’s comments to CNN about her email practices set off the head of the Benghazi Committee.” So the headline is not “Hillary lied about her subpoena,” it’s “Hillary sets off angry Republican.” Rachel Bade began:

The war of words between Hillary Clinton and Trey Gowdy over her email practices is seriously heating up.

Clinton allies and House Benghazi investigators are clashing over the 2016 presidential candidate’s prime-time defense of her email practices, including claims to CNN she did nothing wrong — and had “no obligation” to hand over any correspondence.

-- The Wall Street Journal offered a decent fact-check online on the entire CNN interview by ex-Politico writer Byron Tau, picking apart where Hillary’s arrogant answers to CNN ran afield. The headline was "A Fact-Check of Hillary Clinton’s CNN Interview on Her Personal Email."