'80s Pop Star Morrissey: 'Obama Seems to Be White Inside'

Eighties pop star Morrissey -- lead singer of the Smiths, a major indie sensation -- has been a wildly erratic pundit in his advanced age. Last year, he declared “I see no difference between eating animals and pedophilia. They are both rape, violence, murder.”

Now he’s declared to Alternative Nation that “Obama seems to be white inside.” He never supports the “innocent black people who are murdered by white police officers.” HT Soopermexican: 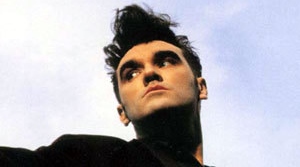 Morrissey believes that the president “doesn’t appear to support black people when they most need it,” pointing to the recent events in Ferguson, Missouri as an “obvious example.”

He continued, “There is an obvious racial division in America and it’s exploding and Obama doesn’t ever support the innocent black people who are murdered by white police officers who are never held accountable. You would expect him to be more understanding of what it means to be black. But so far, he hasn’t been. There’s no point in continually saying that we must support the police when it is obvious to the entire world that the police in America are out of control."

Morrissey’s still on the meat-is-murder kick in the new interview: “I very slowly edged away from family get-togethers because I just couldn’t stand to see bits of flesh on plates. It was like looking at small children being eaten....People who feed their children bits of animal carcass are insane, and the issue of protein is a brainwashing myth.”

And: “I’ve been in Dallas for the last week and every single television commercial is either steak or chicken. It’s as if they want to wipe out the entire American population with bowel disease or cancer. And they are!”