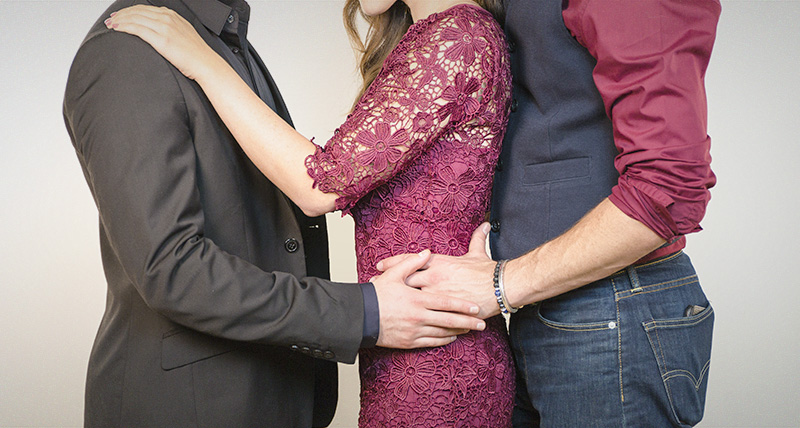 Washington Post reporter Caitlin Dewey’s beat is the Internet. But her big piece on the front page of Wednesday’s Style section is about something broader: “Forsaking monogamy: The evolution of relationships has made affairs less clandestine and less combustive. And of course there are Web sites to help match tryst-seekers.”

This being the Post, there is no space for critics of the "evolution" of online adultery Web sites or their users. Dewey promoted the “non-monogamous dating site Open Minded,” where her married female subject, Jessie,  advertised, “I’m into building deep and loving relationships that add to the joy and aliveness of being human.” She talked her husband into “ethical non-monogamy.”

The online headline was “Are new dating apps killing monogamy? Or has it always been dead?” Dewey pushed (B). Or monogamy is an old “agricultural” tradition that’s fading away in the modern age. Adultery is the new mainstream, according to Open Minded founder Brandon Wade:

Open Minded is a new kind of dating site for a newly mainstream lifestyle: one in which couples form very real attachments, just not exclusively with each other. He expects swingers, polysexuals and experimental 20-somethings to use his site. But he guesses that most of his 70,000 users are people like Jessie: Those in committed, conventional relationships, who realize that, statistically speaking, few modern couples stay with a single person their whole lives.

“If you look at marriage, it developed as a survival strategy and a means of raising kids,” Wade said. “But relationships are no longer a necessary component of life. People have careers and other interests — they can survive without them.”

That’s not wrong, says Helen Fisher, a biological anthropologist and one of the world’s leading relationship researchers. In the caveman days, humans teamed up in non-exclusive pairs to protect their children. Later, as people learned to plant crops and settle in one place, marriage became a way for men to guarantee kids, and for women — who couldn’t push heavy plows or carry loads of crops to market — to eat and keep a roof over their heads....

In fact, given the history and prevalence of non-monogamous relationships throughout cultures, it’s not scientifically correct to say the human species mates or pairs for life. Dogs mate for life. Beavers mate for life. Humans have one-night stands, paramours and a 50 percent divorce rate.

Fisher dubs it a “dual reproductive strategy”: We’re biologically programmed to form pair-bonds, yes, but some people — many people — are also programmed to seek out variety.

So, if you stay true to your spouse, you’re more like a dog or a beaver than a human. To the Post, this is about empowering the ladies, not the men:

More and more women will make this choice or consider it, Fisher expects; it’s in keeping with decades of widespread social change and women’s empowerment. Just 30 years ago, when Jessie was in her 20s, the average woman married at 23 and had her first child within the year. Her mother’s generation didn’t even leave the home. The majority simply raised kids, preached chastity and finger-waved their hair.

“That’s all sliding away from us,” Fisher said. “We’re shedding all these agricultural traditions.... [and] returning to the way we were millions of years ago.”

The Post story doesn’t quite explain that the Open Minded site is selling threesomes and other polyamorous hookups from its home page. Wade tells the Web surfer on the home page he’s created “a safe and stigma-free environment that brings the ease and flexibility of online dating to the currently underserved world of open relationships.”

Dewey ends with a little slam on that ancient Christianity thing, and how millennials have no use for it: “Thus far, most of its self-declared ‘monogamish’ users are under 33. In other words, they’re women (and men) who paid off their own student loans, fooled around on Tinder — and grew up with a notion of personal independence much different from the one taught in the 1st century A.D.”

PS: On her Twitter page, Dewey toed the usual liberal line: “The one kind of online shaming I could probably get behind,” she wrote, and linked to an NPR article on.... “drought-shaming” in California.