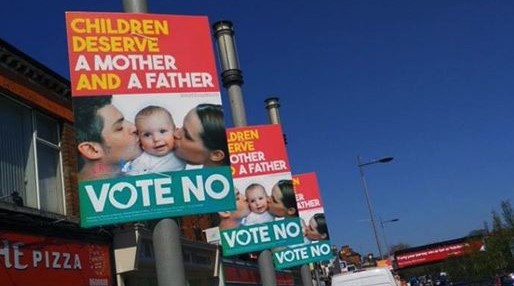 The dramatic victory for “gay marriage” in Ireland has the “No” folks in part pointing fingers at foreign money. American foreign money. The "cultural imperialism" is coming from the Left.

A petition has been launched which says that “this push for same-sex marriage in Ireland has not at all been a ‘home-grown’ phenomenon, but, rather, a carefully-orchestrated and massively well-funded assault on the natural family, coming from private American funding.”

Atlantic Philanthropies, a charity founded by Irish-American businessman Chuck Feeney, boasts it has poured about $28 million over the past 13 years into gay-Left campaigns in Ireland. A columnist for the Irish Times, Breda O’Brien, complained ahead of the balloting at the thought of American dollars buying Irish votes:

This is not Atlantic Philanthropies funding a hospital or school. This is foreign money being systematically invested to change public opinion, to deliver seamlessly a Yes in a referendum that has enormous consequences for family law for generations. All the while soothing us by spinning it as just ‘seventeen little words’. Can American money buy an Irish referendum? Let’s wait and see.

"GLEN had extensive lobbying and public policy experience but their multi-year grant from Atlantic enabled them to ramp up their work into a full-time highly professionalized lobbying machine. It works `inside' the machinery of government where it uses a 'principled pragmatist' model in which it consolidates support, wins over the doubtful and pacifies those who are opposed."

The petitioners feel most Irish voters are unaware that foreign money is being used to boost the Yes campaign. O'Brien wrote: “Groupthink has been exalted to an Irish sacrament. While journalists were targeting tiny bootstrap conservative organisations and accusing them of being American-funded, GLEN, the most successful lobby group in Irish history, was swimming in greenbacks."

The Guardian newspaper charged that the American lobby group the National Organization for Marriage was funding the "No" vote, something they denied.