In the latest disclosure showing a dramatic conflict of interest, Politico’s Dylan Byers reports “ABC News chief anchor George Stephanopoulos has given $50,000 to the Clinton Foundation in recent years, charitable contributions that he did not publicly disclose while reporting on the Clintons or their non-profit organization.”

In both 2013 and 2014, Stephanopoulos made a $25,000 donation. Byers noted the ethical lapse: “Stephanopoulos never disclosed this information to viewers, even when interviewing author Peter Schweizer last month about his book Clinton Cash, which alleges that donations to the Foundation may have influenced some of Hillary Clinton's actions as Secretary of State."

On April 26, Stephanopoulos aggressively questioned Schweizer as if he were there to throw every Clinton hardball at him, such as: 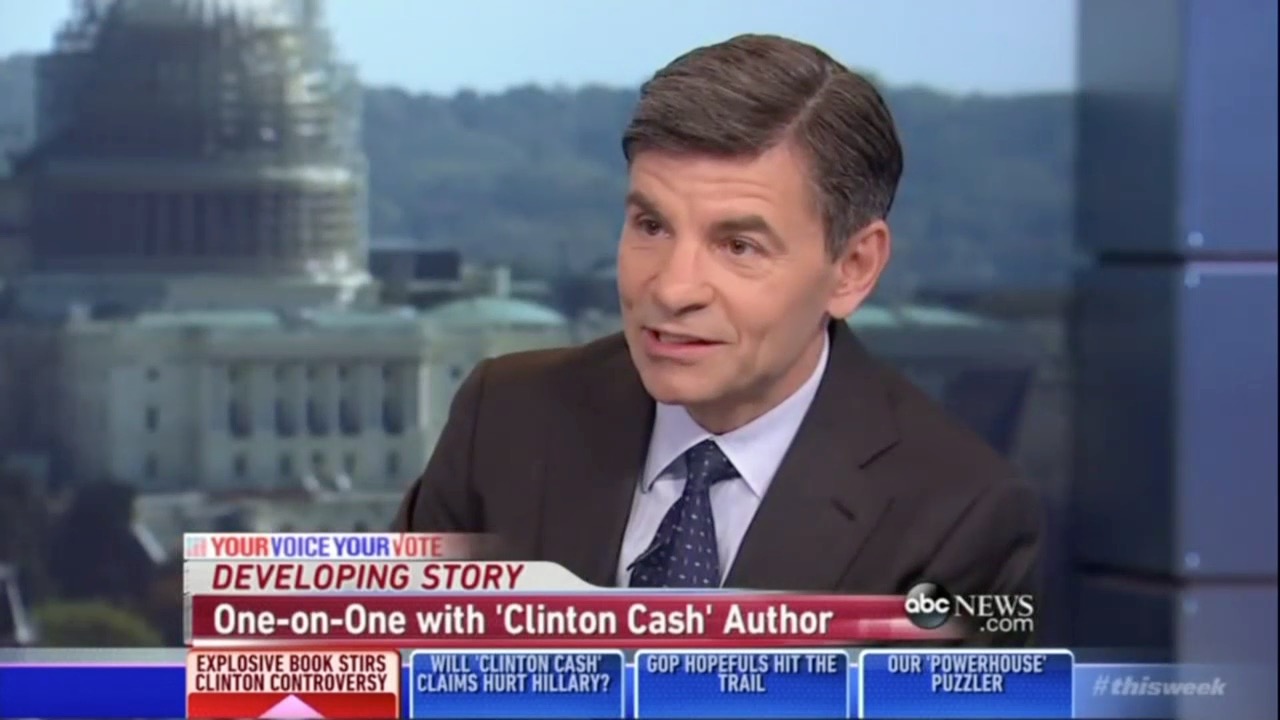 -- "As you know, the Clinton campaign says you haven't produced a shred of evidence that there was any official action as secretary that supported the interest of donors. We’ve done investigative work here at ABC News, found no proof of any kind of direct action. And an independent government ethics expert at the Sunlight Foundation Bill Allison wrote this. 'There's no smoking gun. No evidence that the changed policy based on donations to the foundation. No smoking gun.' Is there a smoking gun?

It’s especially galling that Stephanopoulos dragged out financial-backer questions at Schweizer while he hid his own: “As you know, the Democrats have said this is indication of your partisan interest. They say you used to work for President Bush as a speech writer. You are funded by the Koch brothers. How do you respond to that?”

In a statement to Politico Stephanopoulos apologized:

"I made charitable donations to the Foundation in support of the work they’re doing on global AIDS prevention and deforestation, causes I care about deeply," he said. "I thought that my contributions were a matter of public record. However, in hindsight, I should have taken the extra step of personally disclosing my donations to my employer and to the viewers on air during the recent news stories about the Foundation. I apologize."

ABC News said it was standing behind its star anchor in its own statement:

"As George has said, he made charitable donations to the Foundation to support a cause he cares about deeply and believed his contributions were a matter of public record," the network's statement read. "He should have taken the extra step to notify us and our viewers during the recent news reports about the Foundation. He’s admitted to an honest mistake and apologized for that omission. We stand behind him."

But neither ABC nor Stephanopoulos seem to be contemplating that perhaps its star anchor is a little too close to the Clintons for any viewer to perceive their network as attempting to be impartial over the coming campaign.

This kind of failure to disclose is a recurring Stephanopoulos offense. As Brent Bozell reported ten years ago, George Stephanopoulos wasn't quite complete when he claimed "full disclosure" before his Sunday interview with the old boss (the one that used to scream at him in "purple rages") that he worked with him in the 1990s. In fact, the day before the interview, he moderated (for cash? or just a personal favor?) a panel at the Clinton Global Initiative confab in New York on "Religion, Politics, and Social Progress."