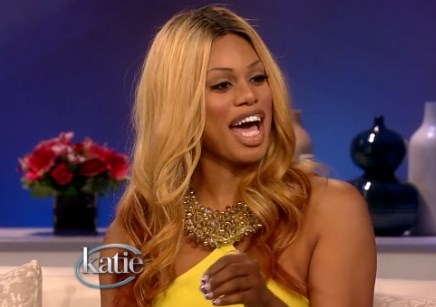 This week’s edition of People magazine is a double issue on the “Most Beautiful” people. To hit their progressive quota, People was merely the latest magazine to honor transgender actor (Charles) Laverne Cox as a “most beautiful” woman. He was “The Trailblazer.”

“My most beautiful memory comes from before I transitioned,” says the Orange Is The New Black star and first transgender actress to be nominated for an Emmy. “I was the runner-up in a beauty pageant, and it was the first since I embraced the full feminine presentation. It felt so empowering – like it was something I’ve been running away from my whole life.”

People also checked the LGBT box by including two same-sex couples in its photo layout on “Perfect Pairs” – Ellen DeGeneres and Portia deRossi for the lesbians, and Neil Patrick Harris and David Burtka for the gay men. “Sex appeal, smarts, and sizzling chemistry keep these star couples in sync,” read the promotional copy.

In the front of the magazine, in the “Why I Care” section, gay Modern Family actor Jesse Tyler Ferguson is brought in to promote his effort to sell bow ties to promote “marriage equality” at TieTheKnot.org.

“Being married was something I always dreamed of but never thought of as attainable. I grew up in a time where being gay mean that you weren’t able to be part of the institution of marriage. Look, it you want to get married, you should be able to. If you don’t that’s great, but we really wanted to...I didn’t know it would make me feel different, but there was one day when I got to mark the “Married” box while filling out paperwork at the doctor, and I got extremely emotional. It made me feel like I’m part of something bigger. It’s something everyone should have the right to.”

This is “balanced” a bit by several pages devoted to the women of the Duggar family from TLC (without any religious/political messaging), and Ferguson’s feature sat next to news that Tim Tebow is getting another shot at the NFL (with no mention of his faith or his “controversial” pro-life ad).