Liberal Journos Applaud Hillary As She Jokes About Her Press Avoidance

Hillary Clinton keynoted an event stuffed with political journalists on Monday night, for the Robin Toner Prize, handed out by Syracuse University and named for a liberal New York Times reporter who died in 2008. Mrs. Clinton spoke for 20 minutes, and refused to take any questions. She won a standing ovation anyway.

The prize was awarded to Washington Post chief correspondent Dan Balz, but the story-slash-press release in the Post barely mentioned this was also sort of a Hillary campaign event.

Honored for a portfolio of work written in 2014, editors credited him for “deep and revealing” work that embodies the “classics of the Balz genre: he applied a lifetime of political perspective to tell the story of modern politics through a handful of key figures.”

...“Dan’s ability to step into a political moment and make sense of it is unparalleled,” said Steven Ginsberg, The Post’s senior political editor. “That’s what he did with his winning pieces — he drew on a lifetime of knowledge and perspective to tell the story of modern politics through the actions of individual politicians.”

To find out what Hillary said at the Toner event came on page A4, in paragraph 15 of an Anne Gearan article un-ironically headlined “Clinton: Problems aren’t fixed in ‘ideological bunkers.’” The Post took this to be a Cruz-bashing jibe, not an anti-Bernie Sanders jibe.

At an evening speech named for the late New York Times political correspondent Robin Toner, Clinton gave a spirited defense of the Affordable Care Act. She also joked about her reputation for secrecy and distrust of reporters, and the recent controversy over her use of a private e-mail server and address while serving as secretary of state.

“I am all about new beginnings,” Clinton said. The fresh starts, she said, include “a new e-mail account,” and “a new relationship with the press.”

These remarks are pieced together from news accounts and video clips:

"I am well aware that some of you may be a little surprised to see me here tonight," she said. "My relationship with the press has been at times, shall we say, complicated."

“And when Peter asked if I wanted to spend an evening with a room full of political reporters,” Clinton quipped after taking the stage, “I thought to myself, what could possibly go wrong?”

[The prize is run by Toner’s husband, Peter Gosselin, a reporter for Bloomberg News. He spent two and a half years serving in the Obama administration, including a stint as speechwriter to Treasury Secretary Tim Geithner.] 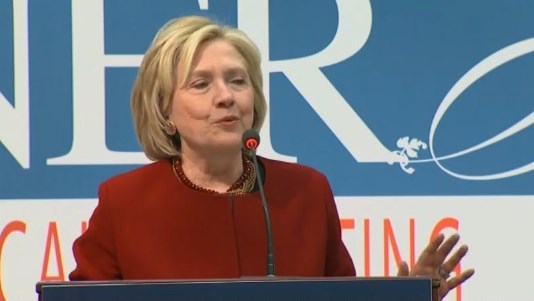 "I am all about new beginnings: a new grandchild, another new hairstyle, a new email account," she quipped, "Why not a new relationship with the press? So here goes. No more secrecy. No more zone of privacy."

The former Secretary of State joked: "Before I go any further, if you look under your chairs, you'll find a simple non-disclosure agreement. My attorneys drew it up."

She went on to say that, in a fragmented modern media world, Americans rely increasingly on reporters "to try to get us out of the echo chambers we all inhabit."

"Mostly I am here because I really admired Robin, I admired her approach toward covering the events that I was involved in, directly, starting in the 1992 presidential campaign, when she covered that campaign," Hillary explained.

"You are facing fundamental questions that may not fit into 140 characters but are nonetheless vital to our democracy. I think the stakes are really high," Clinton said. "Too many of our most important debates occur in what I call an evidence-free zone, ideology trumping facts, made-for-cable shout-fests, twitter storms, drowning out substantive dialogue and reporting that often leads to shallower more contentious politics and even no or not the best public policy."

Clinton closed with a pitch for journalism, saying, "We need, more than ever, smart, fair-minded journalists to challenge our assumptions, push us toward new solutions and hold all of us accountable."

That apparently made it safe for a standing ovation. It's always something to observe (as I have) journalists refuse to say the Pledge of Allegiance in the White House, but it's okay to give Hillary a standing O.

But Hillary's for accountability until she finds it inconvenient. National Journal reported Clinton took no questions after her 20-minute speech, which prompted Dan Balz to reportedly make Clinton an offer: “I am happy to yield my time back to you if you want to take some questions.”

PS: Speaking of prizes and "echo chambers," Toner was a contender in our Media Hero Award category in 1989 for her syrupy tribute to then-Senate Majority Leader George Mitchell:

"He [George Mitchell] talks about the record of legislation the Senate Democrats are building, the substantive progress on issues from oil spills to rural development, which so often gets overlooked in the day-to-day political analysis of 'up or down, winner or loser.' His logic is crisp, unassailable, his manner far removed from the thrust and parry of contemporary politics. He is the soul of judiciousness, highminded in his concern for governance. But some in his party would like for a bit more of the street fighter." -- Reporter Robin Toner in The New York Times, October 17, 1989.

She also provided that service to Sen. Jay Rockefeller:

"He brushes away all the psychological theories of guilt and expiation that surround the Rockefeller family, the getting of its fortune and the giving away. But he clearly wants a place in the family pantheon. His niche, if he has his way, will be as the voice of compassionate government, provider of health care, nurturer of children." -- Reporter Robin Toner in The New York Times Magazine, July 21, 1991.

The late Senator Edward M. Kennedy described Toner as “a reporter’s reporter who deeply cared about the people and the issues she covered.”