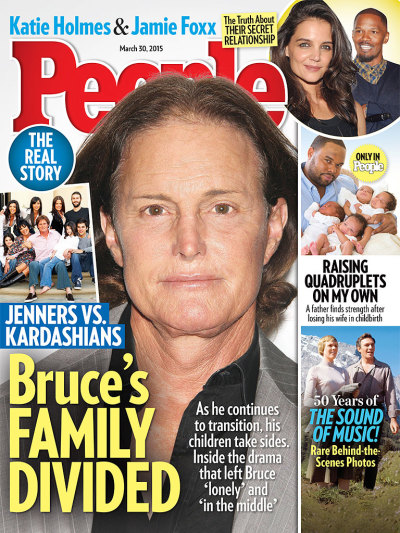 People magazine exploited the “transgender journey” of 65-year-old Olympic legend Bruce Jenner, exaggerating a family split that seems to be more about his divorce than his gender confusion (although they’re quite related, surely). This family is in television, so they can’t afford to look “transphobic.”

People felt compelled to announce it would acknowledge physical reality, but bow to political correctness: "In keeping with advice from experts, PEOPLE is taking its cues from Jenner's family in regard to the use of male pronouns." No one skeptical of “gender journeys” is allowed to speak.

The “experts” are everything. Jenner “has chosen a new [female] name, an insider tells PEOPLE, but is not ready to share it, and he is proceeding at his own pace, as experts advise.”

The children are in “denial,” somehow, and not Jenner. “Denial usually comes first,” said psychologist Mary Andres, followed by anger connected to a “loss of control: ‘How will I explain this to my friends?’ You are forcing me into a process I didn’t choose – to come out as a partner, child, or parent of a trans person.”

An anonymous insider explained, “He had learned a lot just over the past year about what transgender means....Trans people can identify as female and still be a jock, and do all the things that are generally thought of as more masculine. It seemed reassuring to him that he could correct his gender to what it's supposed to be but not have to give up or change everything else about his life.'"

We’re told that at the end of his first two marriages, he told each ex-wife that he thought he was “assigned” the wrong gender, but kept getting married again, wondering if was more of a “transvestite thing,” but now, he’s going to stop “fooling himself.”

Then, nearly three years ago, around the time of his son Brandon’s wedding, “he just had a feeling of ‘enough,’” says the source. “Enough trying to fool himself and others, enough of letting other people dictate how he was going to live.”