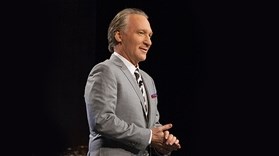 While the liberal media insisted it was politically poisonous for Scott Walker to answer "I don't know" if President Obama is a Christian, it's never unacceptable to suggest Jeb and George W. Bush chose their brand of Christianity for political reasons. That's exactly what HBO star Bill Maher did in a blog post titled "Jeb Bush: Convenient Catholic?"

Recall that Maher donated $1 million to Barack Obama's re-election and no one in the press has located a reason why Obama should be asked to distance himself from anything Maher has said, so why start now? That would only make them look even-handed and principled. Maher wrote:

Did you know Jeb Bush is Catholic? Neither did I. He certainly doesn’t let it get in the way – like when he used the Church’s belief in the sanctity of life as cover for dicking around with Terri Schiavo, but didn’t let it prevent him from executing 21 guys. Anyway, whatever it was that Poppy and Bar believed around the house, it’s not something that rubbed off on the kids.

Now, lots of swell leaders have changed faiths. Constantine, Newt Gingrich... George W. had a good reason to switch: Billy Graham told him an extra-strength God could keep him off the sauce. But Jeb Bush converted to Catholicism in 1996 – 22 years after marrying his Mexican-born wife, Columba, – and conveniently between the first time he ran for governor (and lost) and the second time he ran, and won. The Bushes play election hardball, but they also play the margins. They look for every little edge. So is there something to this?

Jeb noticed his wife was Catholic after 22 years, and ran for Governor of Florida, where the voters are 26% Catholic / 25% Evangelical Protestant.

The voters in both states were only 15 percent mainline Protestant, the faith with which Bush children come originally installed. Now, of course, who am I to question God’s power to work wondrous change? I’m just saying the Bush boys tend to believe in whatever juju the locals do.

Even Salon.com wasn't buying the "going Catholic to win more votes" line: "According to Pew Research, only 23.9 percent of Christians identify as Catholic nationally, while over 50 percent identify as some sort of protestant."