Katie Couric is among the elites applauding Tuesday’s David Brooks column coming to the defense of Brian Williams, “The Act of Rigorous Forgiving.”

Once again, Brooks is playing ideological switcheroo. Maureen Dowd is the Williams scold (he's a ticking bomb!), while Brooks is the scold of the Williams critics. Although it should be said the critics are across the ideological spectrum, not just on the right.

Brooks looks most ridiculous when he suggests the unfolding exercise in accountability for self-aggrandizing Williams is somehow a “barbaric” crusade, an example of “coliseum culture.” In the wake of ISIS burning pilots alive, it’s somehow metaphorical savagery to condemn journalists for lying to make themselves look good?

There’s something sad in Brian Williams’s need to puff up his Iraq adventures and something barbaric in the public response.

The sad part is the reminder that no matter how high you go in life and no matter how many accolades you win, it’s never enough. The desire for even more admiration races ahead. Career success never really satisfies. Public love always leaves you hungry. Even very famous people can do self-destructive things in an attempt to seem just a little cooler. 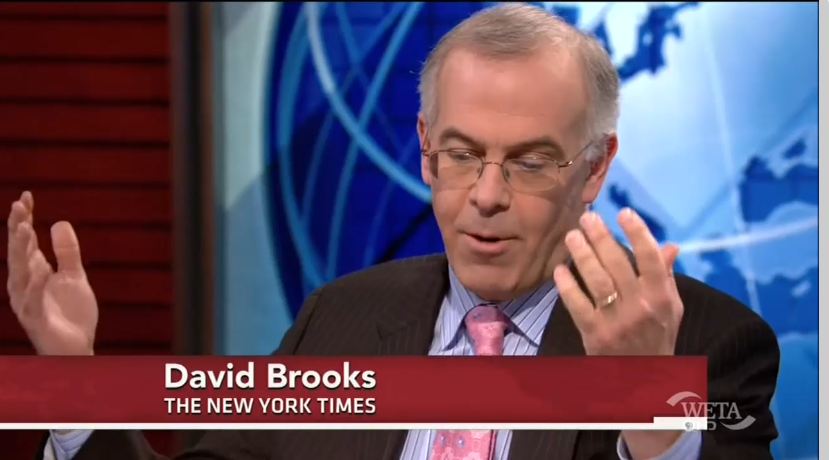 The barbaric part is the way we respond to scandal these days. When somebody violates a public trust, we try to purge and ostracize him. A sort of coliseum culture takes over, leaving no place for mercy. By now, the script is familiar: Some famous person does something wrong. The Internet, the most impersonal of mediums, erupts with contempt and mockery. The offender issues a paltry half-apology, which only inflames the public more. The pounding cry for resignation builds until capitulation comes. Public passion is spent and the spotlight moves on.

I’ve only spoken with Williams a few times, and can’t really speak about the man (though I often appear on NBC News’s “Meet the Press”), but I do think we’d all be better off if we reacted to these sorts of scandals in a different way. The civic fabric would be stronger if, instead of trying to sever relationships with those who have done wrong, we tried to repair them, if we tried forgiveness instead of exiling.

Yes, the same man who called Sarah Palin "a joke" and a "fatal cancer" to the GOP and mocked Ted Cruz as "our national aphrodisiac" is going to lecture on a "civic fabric." The man who said the Tea Party "infected" the Republican Party and has "no sense of moral decency." Someone might want to read his own clips before posing as Weaver of the Civic Fabric.

James Taranto tweeted about the Brooks “humblebrag” (I often appear on NBC on Sundays), but it should be seen as a disclaimer. Brooks is a champion at pandering to people who spread his center-left views, from NBC to PBS and NPR. This pitch for Williams is also dibs on the NBC green room. He concluded:

I guess I think Brian Williams shouldn’t have to resign, for the reason David Carr emphasized in The Times: Williams’s transgressions were not part of his primary job responsibilities. And because I think good people are stronger when given second chances.

But the larger question is how we build community in the face of scandal. Do we exile the offender or heal the relationship? Would you rather become the sort of person who excludes, or one who offers tough but healing love?

The "sort of person who excludes" certainly matches the PBS and NPR bosses who use Brooks as the so-called Republican/conservative viewpoint and exclude anyone who truly represents conservatives.