On CNN's Reliable Sources on Sunday, host Brian Stelter touted the scary influence of Fox News: "Will those two guys, Fox News president Roger Ailes and his boss, Rupert Murdoch, be picking your next president? It may sound ridiculous, it may sound like some liberal conspiracy theory, but there's no disputing that they have real power in the GOP primaries. And the media pays attention to it, smartly. The New York Times reported this week on Murdoch's dislike for Mitt Romney. And now, as we all know, purely coincidentally, Mitt Romney is not going to be running for president in 2016." 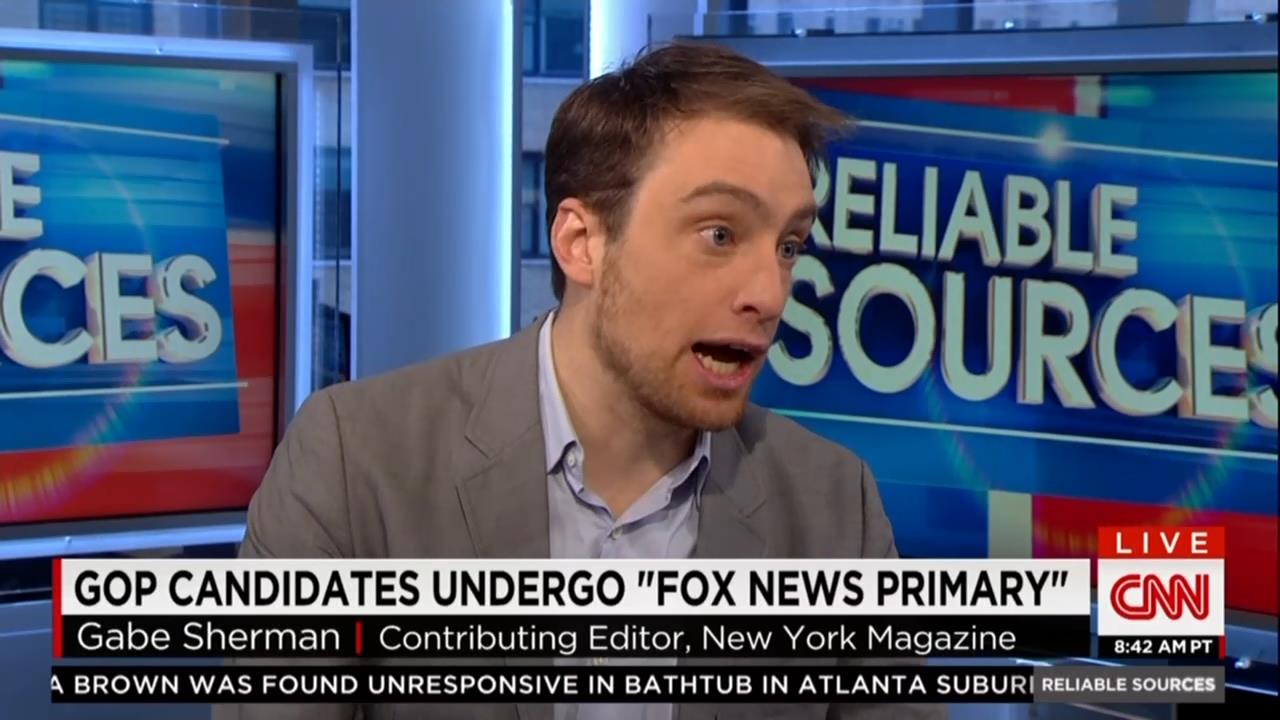 Stelter brought on liberal Ailes-trashing biographer Gabriel Sherman, insisting "we're just scratching the surface there in that intro about the power of FOX and the power of Roger Ailes. How would you describe it when it comes to presidential primaries?" Sherman insisted "without a question in the Republican primary, Roger Ailes controls the largest bloc of reliable Republican voters."

Knowing that sounded a little kooky, Stelter tried to help: "By controls, you mean they watch Fox News." Sherman stuck to his line: "They watch Fox News. They turn out in large numbers come primary day. And the candidates are already kissing the ring. I can report that according to my sources, Rick Perry came to New York before going to Iowa for the Freedom Summit to meet with Roger Ailes, to have a meet-and-greet and kiss the ring. So, these candidates are already courting Ailes and trying to get on his good side to get reliable coverage going into the primary season."

Stelter followed up: "So, what I might say to you is these candidates also go and visit other network executives, visit other media executives. What's different about Fox?" Sherman repeated the puppet-master line: "Because Fox, as I said, controls this audience. If you want to be a Republican front-runner, you have got to get prime spots on Fox. You have got to get prime bookings. And Ailes is that ring that you need to kiss."

This is the game liberals can play when they run ABC, CBS, NBC, PBS, NPR, CNN, Al-Jazeera America, and so on. There's one dominant news source among conservatives, therefore the Fox boss is the Kingmaker of the GOP. When Brian Williams bows and scrapes before Obama, that's just the power of charisma.

Stelter also brought in Matt Lewis of the Daily Caller, who wasn't having any of this conspiracy talk:

MATT LEWIS, DAILY CALLER: No, I don't think that's right. Look, I think that the bosses are important because they created a network that is by far the most watched network, cable news network in America, and especially among grassroots conservatives who vote in primaries.

But in terms of them having some sort of a conspiracy to help boost one candidate or another, I mean, look, if they had their way, the Republican Party would be a pro-immigration reform party right now. And so I think the notion that they can, sort of from on high, wrap their arm around somebody like Chris Christie, I don't buy that.

I think that, look, if you were to poll Bret Baier and Brit Hume and Chris Wallace and Sean Hannity, you would probably get them picking different candidates that they favor. I don't buy that they are going to boost any one person. I do think it will be fought on Fox News, but for different reasons.

Stelter turned back to Sherman at the end: "What are you going to watch for as the next step in the so-called Fox News primary?" Sherman replied, "Well, I think the big question for Republicans is that without question Fox is a powerful voice, but it actually was damaging to the party in a general election climate." That is, Fox made the nominee bend too far to the right, another ironclad liberal assumption.