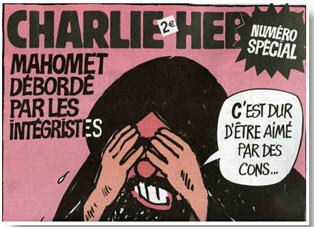 American liberals revere the British Broadcasting Corporation (BBC) as if they were the gold standard for reliable international news coverage. They won’t acknowledge that the BBC has all the leftist impulses that American liberal media outlets do, and a few more.

For example, Adam Sherwin at the (U.K.) Independent reported on January 25 that Tarik Kafala, the head of BBC Arabic, the largest of the BBC’s non-English language news services, would not describe the Muslim attackers who shot up the French satirical magazine Charlie Hebdo as “terrorists.”

“We try to avoid describing anyone as a terrorist or an act as being terrorist. What we try to do is to say that ‘two men killed 12 people in an attack on the office of a satirical magazine’. That’s enough, we know what that means and what it is.”

Mr Kafala said: “Terrorism is such a loaded word. The UN has been struggling for more than a decade to define the word and they can’t. It is very difficult to. We know what political violence is, we know what murder, bombings and shootings are and we describe them. That’s much more revealing, we believe, than using a word like terrorist which people will see as value-laden.”

Using the UN as your language police -- the ones who despise Israel ("Zionism is racism") and put dictatorships on their "human rights" watchdog panels -- is not an act of objectivity. It's an admission of leftism. Sherwin underlined that all this is not out of line with the official BBC rules.

Their guidelines state: “[The BBC] does not ban the use of the word. However, we do ask that careful thought is given to its use by a BBC voice. There are ways of conveying the full horror and human consequences of acts of terror without using the word ‘terrorist’ to describe the perpetrators.

“The value judgements frequently implicit in the use of the words ‘terrorist’ or ‘terrorist group’ can create inconsistency in their use or, to audiences, raise doubts about our impartiality.  It may be better to talk about an apparent act of terror or terrorism than label individuals or a group.”

When reporting an attack, the BBC guidelines say it should use words which specifically describe the perpetrator such as “bomber”, “attacker”, “gunman”, “kidnapper” or “militant”.

That decision could be ascribed to liberal politics, and it could also be ascribed to the BBC wanting to gain audience in the Middle East with its Arabic service.

So does the BBC also avoid the words "terror" or "terrorist"? The blog BBC Watch says of course not:

Tarik Kafala’s claim that the correct terminology for those who gunned down seventeen people in cold blood is “loaded” means that the BBC cannot tell this story accurately and impartially to its audiences.

That fact will come as no surprise to anyone who has been monitoring the BBC’s inconsistent use of the word terror and its habit of hiding behind the smokescreen of “value judgements” it claims are implicit in that word’s use and may “raise doubts about our impartiality”.

But when shooting attacks by a far-right extremist in Norway do get the BBC editorial thumbs-up for description as “terror attacks” and “terrorist activity” is used to describe the actions of members of an armed group in Northern Ireland, it is of course difficult to conceive of any reason for the refusal to accurately name terrorism elsewhere which does not stem from a “value judgement” regarding the perpetrators – or their victims – and impossible to see how the BBC can make any honest claim to cover the subject of terrorism with impartiality.