On December 28 and 29, The Washington Post highlighted a tiny rally of leftists opposing the name of the Washington Redskins – on the front page of the Metro section twice – both before and after the march, which turned out only about 100 activists. Over a large color photo on the front of the Metro section, the Post ran this bold, italicized quote from activist Gregg Deal: “The purpose of stereotypes is to dehumanize indigenous people.”

On Friday, after the March for Life brought tens of thousands of pro-life activists to Capitol Hill to protest the dehumanization of the “fetus,” the Post buried it on A-6. The headline skipped the “life” part. It was “Abortion opponents sense attitude shift: Speakers at Mall rally say nation’s views are aligning with theirs.”

The story had a small color photo with the proto-typical liberal picture. (Photo-typical?) It showed equal numbers of pro-lifers and abortion advocates facing off in front of the Supreme Court. This always distorts the truth – that there are tens of thousands of activists on one side, and just tens on the other.

To be fair, the Post put abortion on the front page, but in a storyline they enjoy much more: a GOP food fight. The headline was “Abortion debate reveals GOP rift.” The headline inside the paper was “Some in GOP grow tired of culture wars.” Post reporter Ed O’Keefe used the label “anti-abortion” five times, including one mention of “a setback for the party’s most strident anti-abortion voices.” The word “pro-life” wasn’t used.

The Post and other liberal outlets aren’t so keen to highlight any moderate Democrats who might think the liberals are pushing too hard on abortion or gay issues. That’s probably not front-page material. 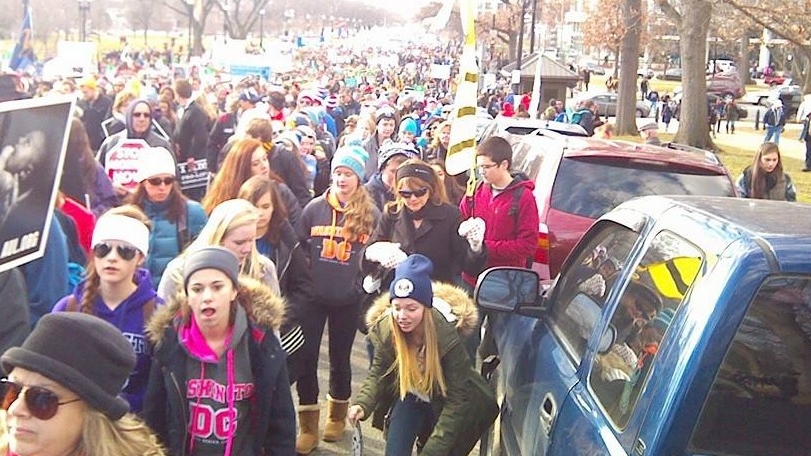 Michelle Boorstein’s March for Life article was fairly objective, covering it mostly as a religion story, which it certainly is, with the emphasis on how Pope Francis is de-emphasizing abortion as a defining church issue to bring to the public square. No speakers from the rally were quoted, but she emphasized how a nun who comes to the pro-life march to rally against the death penalty touted it was "the first of the four years that she had not had a negative encounter with abortion opponents who thought she was diluting their message."

The story began: “With legislative drama about abortion literally unfolding behind them at the U.S. Capitol, tens of thousands of abortion opponents held an upbeat rally Thursday to emphasize participants’ belief that U.S. culture is turning in their favor.” She noted it was "overwhelmingly young and religious" and the activists carried signs like “We Are the Pro-Life Generation.”

It should be said that A-6 is better page placement than B-6 (inside Metro), but not better than the top of B-1.

Boorstein also allowed the liberal group “Catholics for Choice” to get in their strange view that pro-lifers are losing at the polls:

On the other side of the abortion issue, Jon O’Brien, the president of Catholics for Choice, said in a statement: “Having failed to make political or electoral inroads to defeat pro-choice support in the United States under Roe v. Wade, the anti-choice lobby is elbowing into more popular issues like immigration reform and anti-death penalty advocacy. Leaders in these movements would be advised to steer clear of the anti-choice lobby’s attempt to co-opt their issues to one that so clearly has failed in U.S. opinion.”

O’Keefe’s article highlighted why pro-lifers might sense some optimism in the polls, making O'Brien's talk of opinion "failure" look a little silly:

Polls indicate that Americans are generally supportive of legal abortion but that they back restrictions on the procedure late in pregnancy. A Quinnipiac University poll in November found that 60 percent of American voters favored a ban on abortions after 20 weeks, including 46 percent of Democrats and 59 percent of women.

Abortion opponents saw the bill as an opportunity to consolidate gains as they pursue a strategy that is less about banning the procedure outright and more about dramatically reducing access. In the past four years, states have enacted 231 abortion restrictions, according to the Guttmacher Institute, a think tank that supports abortion rights. The restrictions range from limiting the use of the abortion pill to imposing strict standards on facilities. Many are the subject of legal challenges by abortion rights groups.

UPDATE: While the Post prefers the term "abortion opponents," would they match that by describing the other side as "abortion proponents"? In a Nexis search of the last five years of Post coverage, I found it only once in  a news report: an October 7, 2013 dispatch by Supreme Court reporter Robert Barnes.

UPDATE 2: It could be worse. See USA Today!