Oprah Winfrey's documentary on gay NFL tryout (and washout) Michael Sam airs on Saturday night. Secular leftist journalists and gay activists desperately wanted a happier story line than the one that unfolded. What was pitched a Major Historical Moment vanished into put-on-waivers obscurity.

Bryan Curtis at ESPN's Grantland site compared the Sam kiss, carefully choreographed for the ESPN cameras by ESPN activists (what other seventh-rounder has a camera crew?), to Victory Over Japan in 1945:

How'd you feel when you saw the kiss? You know the one I mean. If I weren’t such a jaded soul, I’d call it the V-J Day photo of 2014. Michael Sam, the defensive end who’d just been drafted by the St. Louis Rams, turns to his boyfriend, Vito Cammisano, and kisses him. Right on the mouth. Right in front of the world. Jaded soul, right? Not at that moment. I forgot all about the NFL’s long history of coded bigotry and imagined we were on a Devin Hester glide path into the future....

Chris Kluwe, the former Vikings punter who has stumped for LGBT rights, was playing video games during the seventh round. He saw the kiss on Twitter. “People were getting bent out of shape because Michael Sam was kissing his boyfriend. It’s like, what’s the big deal?”

Wade Davis, a former NFL cornerback who came out after retiring in 2003, sat in a coffee shop in New York recently, remembering the kiss. “I could imagine that masculinity just screamed,” he said. “Ahhhhh! You betrayed me, football!”

He laughed. “I also thought about how no straight guy can ever say he didn’t see two men kiss during a sporting event,” Davis said. “And how beautiful was that?”

Remember your smile, because what came after wasn’t nearly as fun. A lot less fun, in some cases. A rearguard of bigots and the enablers of the NFL’s no-“distractions” policy had their own sultry kiss in front of the world. Players and reporters tried to say the right things, to give no offense — which is better than the alternative, but can have a certain narcotizing effect on journalism. Also, Sam got cut — twice. It’s either a credit or demerit to our society that two men kissing on television was the most uncomplicated part of Sam’s first season in the NFL.

Sam's parade was arranged by gay activist/publicist Howard Bragman. He knew Sam’s announcement would be a major event, even in the seventh round. “It’s certainly one of the two biggest comings out ever,” he told the Daily Beast. “This and Ellen.” Bragman gave triple exclusives to the New York Times, ESPN, and Outsports. 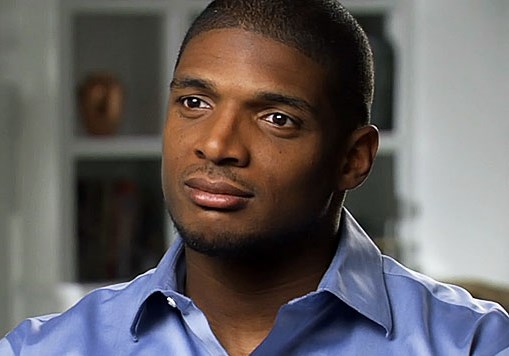 Now Sam has told GQ he wishes he hadn't gone this noisy route, preferring a quieter coming out to teammates after he joined a team. But gay activists and gay-friendly journalists really wanted this way, and now mourn that Sam was cut (and not signed a third time) because of bigotry, not ability:

These days, Sam is angry, Wade Davis said. Angry he’s not in the NFL. Some of us are, too. The kiss portended a rousing story with John Facenda narration. Even if we stipulate the Rams and Cowboys gave Sam a fair shake, what about the other 30 NFL teams? In September, Mike Freeman of Bleacher Report engaged in a typical bit of media self-mortification (“We Tebow-ed him”). But he also identified widespread bigotry: “There is no way to get around it: Sam isn’t signed because teams fear his being gay. They don’t really care about the circus. The media, having perhaps overpublicized the story, serves [as] a gorgeous scapegoat.”

Freeman’s isn’t an unusual opinion in the sports press. “Michael Sam is not on an active roster today because he is openly gay,” Cyd Zeigler wrote in Outsports last month. Zeigler said reporters sniffing around for locker-room stories should be hounding the gerontocracy of owners, the “old white guys” who were refusing to sign Sam.

One of the lessons of 2014 is that any nasty rumor you hear about the NFL is at least partially true. There’s undoubtedly some percentage of teams whose owner or GM or coach muttered something that precluded signing Sam. But it’s hard to nail down the breadth of such a snub. Was it half the teams in the league? One quarter? “Unfortunately, it’s one of those things where unless you’re a superstar, a Jackie Robinson–type talent, there are so many plausible reasons they can use for getting rid of you,” said Chris Kluwe.

And it’s worth noting that some Sam fans don’t see a conspiracy. Wade Davis spent chunks of his career shuttling between the far edge of the roster and the practice squad. For him, Sam right now is a marginal NFL player whom a lot of us desperately want to succeed.

Michael Sam’s kiss remains unmoored from a happy ending, a free-agent image floating through cyberspace. But this is 2014 — images can be useful. Outsports has been churning out stories of college and high school athletes who are coming out to their teammates, inspired by Sam and Rogers and Jason Collins. That will eventually trickle up to the pro level.

The kiss also makes you hungry for the next image, another dopamine hit that makes you forget the inevitable messiness of the present and look to the future. “Imagine the Super Bowl’s over and they’re doing the Disney commercial,” said Jim Buzinski. “‘What are you going to do next?’ And the guy says, ‘I’m going to Gay Days at Disney World!’ That would be my ultimate moment, the Super Bowl MVP announcing that to the world.”