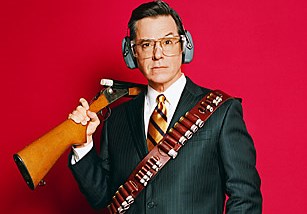 Washington Post TV writer Hank Stuever didn’t refrain from the goo over the end of Stephen Colbert’s tenure at Comedy Central. His "Critic's Notebook" might have been too soaked with tears to be legible, but it made it into print.

The Thursday headline was “The Colbert rapport: How he built a Nation.” The subhead was “Comedy Central’s consummate showman turned a one-man spoof into a nine-year run of zeitgeist gold.” Stuever said the show was so tremendous that you didn’t have to watch it to know its excellence. A periodic check could reconfirm the overall awesomeness:

The show was so good and so meticulously performed that you could, in fact, not watch it. That, too, is high praise. It’s rare for a show and a performer to become so enmeshed with the zeitgeist that ratings become a moot point. Only the most loyal citizens of the so-called Colbert Nation truly needed their nightly dose of the layered political satire that Colbert mastered in the guise of “Stephen Colbert,” a narcissistic, conservative blowhard spouting his fact-averse commentary on the day’s news.

The rest of us could instead check in from time to time and make sure his carefully constructed outrage and indignation were still very much attuned to the degrees of viral outrage and deep indignation that have come to define American life in the early 21st century. The Colbert era was in the air as much as on the air, as the show’s best work took morning victory laps on Internet news feeds. (Italics in the original.)

The joke caught on and never exhausted itself. What we were seeing was the perfect indictment of the world of political punditry, yes, but also a send-up of our inflexibility when it came to opinions, reason and the truth. “Truthiness,” an early invention of the Colbert shtick, allowed its host to have it both ways, as a buffoon who holds objectionable opinions that he intends his liberal-leaning audience to object to by pretending to bask in his jingo-wingo patriotism.

At least Stuever admitted this was a show for liberals: it “was, for its left-leaning viewers, a reassurance: Not only was someone discombobulating the conservative noise machine by mimicking it, he never once let his audience forget that it was all in fun.”

COLBERT: Now, I know there are some polls out there saying this man has a 32 percent approval rating. But guys like us, we don't pay attention to the polls. We know that polls are just a collection of statistics that reflect what people are thinking in reality. And reality has a well-known liberal bias....

I stand by this man [Bush]. I stand by this man because he stands for things. Not only for things, he stands on things. Things like aircraft carriers, and rubble, and recently flooded city squares. And that sends a strong message: that no matter what happens to America, she will always rebound—with the most powerfully staged photo ops in the world.

Colbert even slammed the media as too pro-Bush: "Over the last five years, you people were so good—over tax cuts, WMD intelligence, the effect of global warming. We Americans didn't want to know, and you had the courtesy not to try to find out."